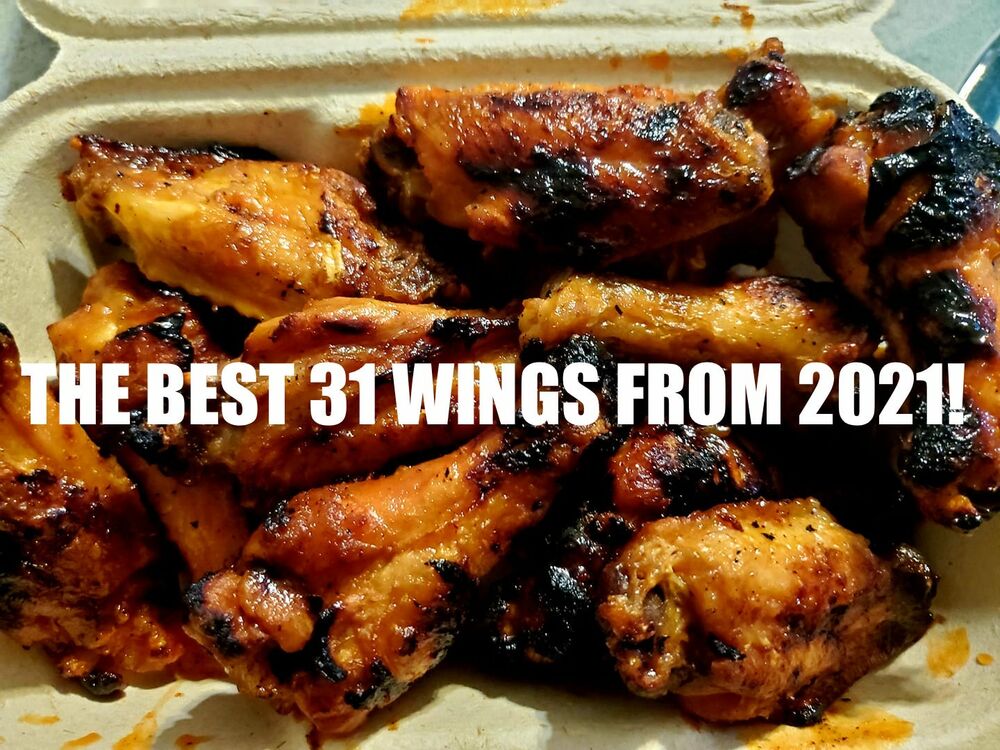 So, as 2021 comes racing to an end we look back on 66 restaurants we visited this year, the 396 plates of wings we destroyed, and all the new flavors as we ran our two-year total to 351! Can you even fathom 351 different flavors of wings?

Nobody would read to the end of a blog that featured 31 different wings, so I’ve decided to break it up into three different weekly posts. Consider this PART ONE of the 31 in 21 series. And bear in mind, that we still have a month to go and might have to add to the list before December ends.

Doni “The Cleaner” hit the shores of North Carolina with his family last summer, but Wingchef Ryan and I went to work anyway. On the first stop, we traveled to Willimantic to visit the Willimantic Brewing Company (or Willibrew). This historic building housed a beautiful restaurant and brewing company, the vibe was amazing, and the menu left us wanting everything on it. So we had to focus! We had six amazing flavors of wings, but the one (crazy as this sounds) that stood out to us was the straight buffalo wing. Why? Because it was grilled! That’s right. At Willibrew you have the option to have your wings oil fried or grilled! Not sure what made the difference, but these buffalo wings were among the most unforgettable we had all year long. 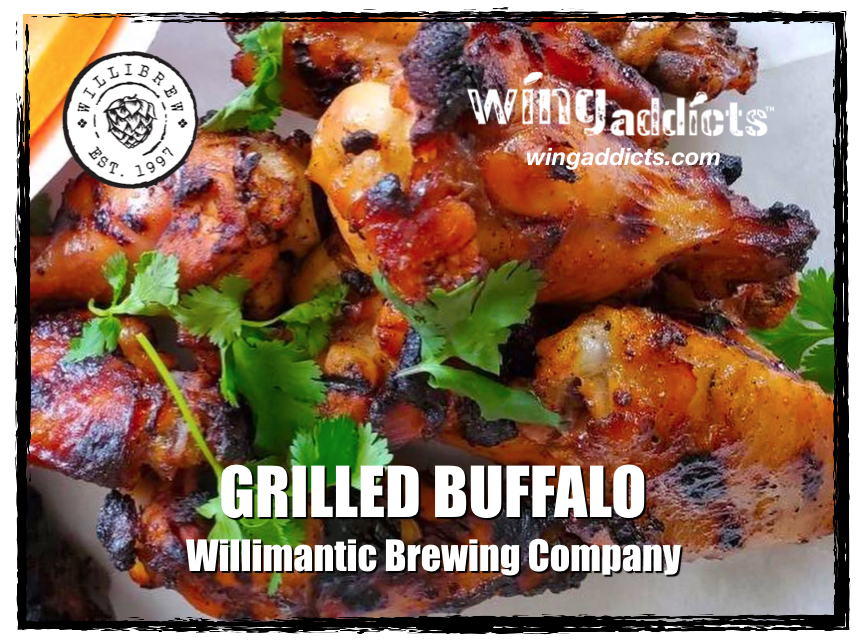 Immediately following Willibrew, Ryan and I (well over 500 lbs collectively) literally walked across the street to an iconic college bar called Blarney’s Cafe. We destroyed eight flavors that came out on a pizza trey and they were all excellent. The best memory was Ryan eating the “Murder” wings and then taking a shot of the Murder sauce which consisted of the two hottest peppers on earth. But, to me, the best wing of the day was the “Blarney’s Special” a combination of a few of their flavors. I still don’t know what the flavor was, exactly, but it’s their top seller and you need to try them when in town! 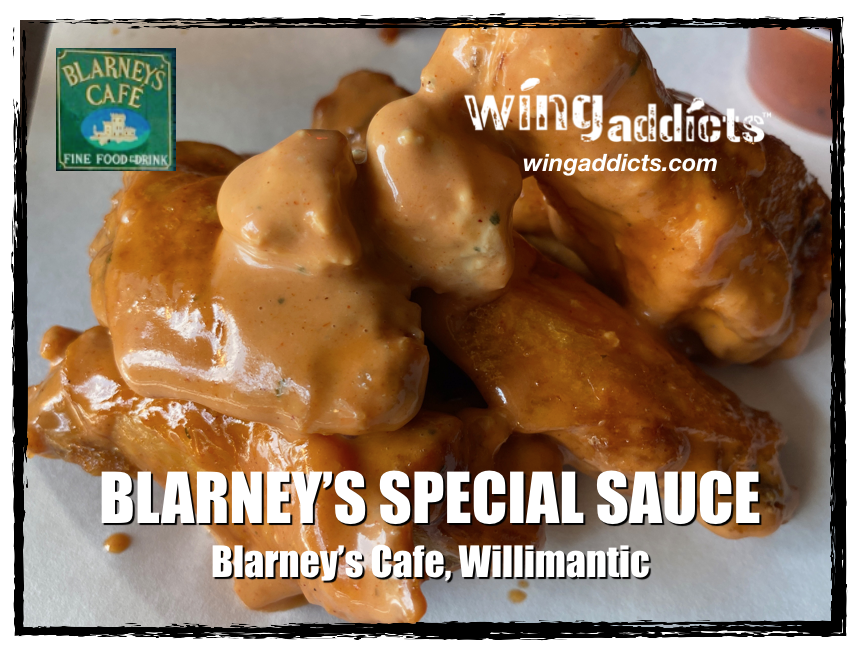 At the beginning of the year, the three of us made plans to go to a restaurant in Meriden, CT one Tuesday night. But when we met there, we discovered that it wasn’t open. There we were, together and without a wing spot. So we did what any true Wingaddicts would do. We improvised. I called my buddy Wags, who lives near Hubbard Park, and he turned me on to a place called AJ’s Oasis. What we found was a super cool local drinking establishment with pool tables, music, and a lot of happy people. The wings were on point, and the one that stayed top of mind was called “Sweet Chili Raspberry.” 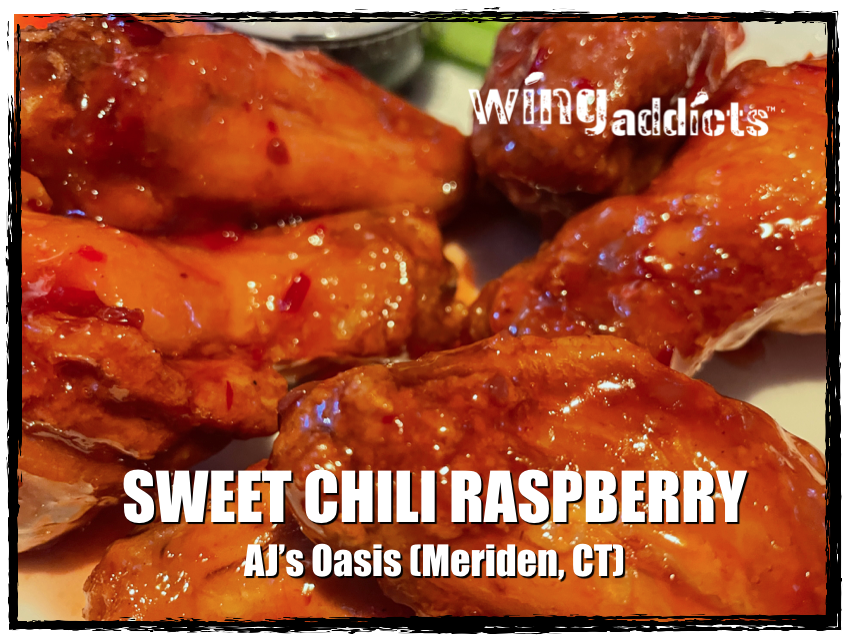 Also in the winter we shot our first and only ever Saturday episode when we went to Black Rock and stopped in at Blind Rhino. Casey Dohme and Chef Jamie Pantenella turned us on to seven plates of A-plus wings, including a few that had won awards at the National Buffalo Wing Festival back in 2019. The year 2020 was a wash because of covid, but the boys went back later in 2021 and crushed the competition (yes the Buffalo, NY competition) taking home four trophies! The top prize in the tournament went to their “Plum Sriracha” wings. And we completely understood why! This place will 100% be our next RELAPSE episode!

WAAAAAY back in the 80’s I was a bit of a men’s softball phenom (I’m not too humble to tell you about it) and played for a few years in Danbury where we always went to Pippa’s Sports Cafe afterward. Wings weren’t a big ticket item back in the 80’s but . . . well, let’s not go there. Doni the Cleaner also had history at Pippa’s having gone to college in Danbury in the 90’s so we finally made it over there to try the wings. They were probably the smallest wings we ate all year long (Bell & Evans, organic, all natural) but that was not a problem. They were cooked to perfection and all eight flavors we enjoyed were excellent. The one we’ll never forget, though, was called Susie Q (named after owner Susie Seri who created the flavor). Like Nat King Cole sang, “Unforgettable, in every way!” And smaller so we could eat MORE! 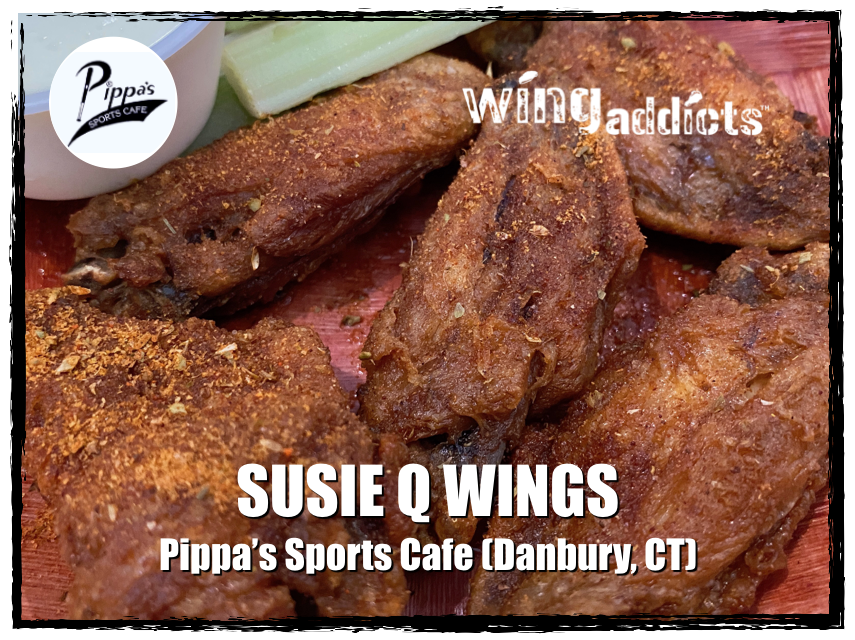 Southington is the birthplace of two Wingaddicts (Doni and Wingchef Ryan) and it also just happens to be one of the wing capitals of Connecticut. One spot we hit in that town is called Hop Haus. It’s very surprising to me that we don’t get lots of posts in Wingaddicts Community about Hop Haus, because the flavors are somewhat unique and the wings are excellent. On this particular day we just fell in love with their Korean BBQ wings. BTW, they opened another location in Plainville this year as well (right near J.Timothy’s and Sliders). Talk about balls! And rumor has it, they stepped up their wing game even more! 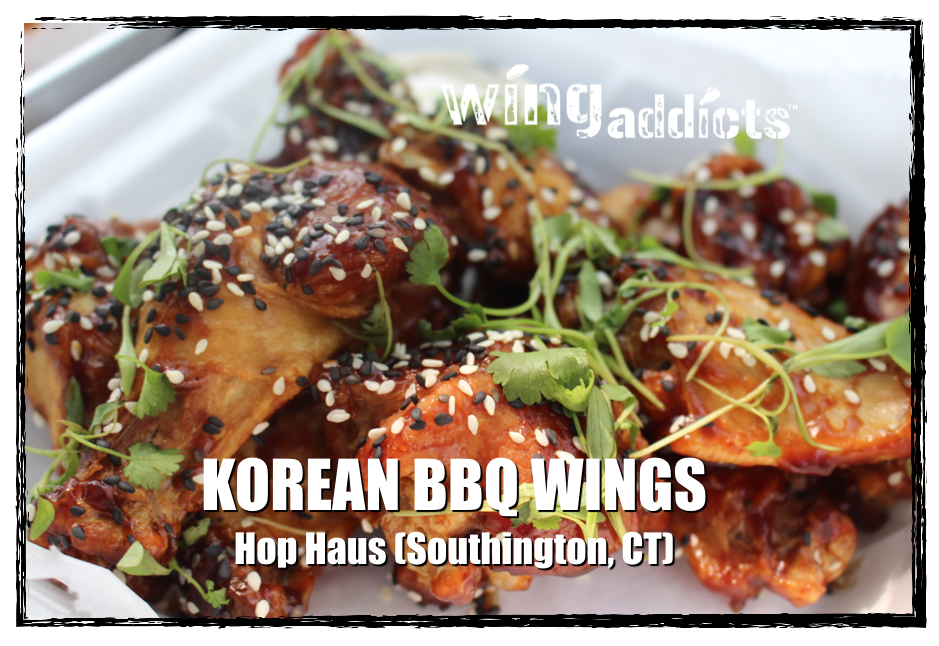 When we started Wingaddicts, I came upon a very old blog online that compared the legendary Dew Drop Inn to a place called Chubby’s. The blog was extensive, and well written and showcased a fair amount of wings. Their conclusion was a draw. "Wow!" I thought. But where was this place, Chubby’s?  A little research found that it was no longer in business. So when I saw that Chubby’s had reopened in Stratford in 2021 and that the owner had gone to high school with my wife, we made a straight line there. This spot, without any question, instantly blew into our all-time top ten. We picked six flavors, giving inspiration to THE BEST item on their menu (the Wingaddicts Pick Six) and every single one of them was mind blowing. The one that stood out to us all was this Mango Habanero. Just look at the picture and take my word for it! 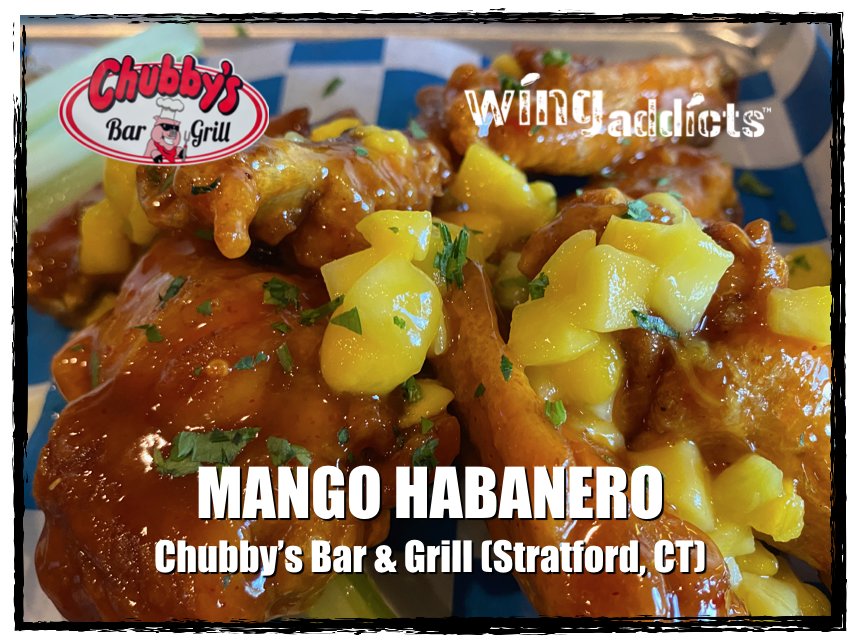 And while you’re at it, have a look at all six we ate that day. Next, grab a friend or two, go to Stratford, and tell Chubby you want “the Wingaddicts Pick Six!” I absolutely promise you’ll be glad you did! Normally, when you go to a restaurant you notice that the food doesn't look like the photos. Well, in this case, WE TOOK THE DAMN PHOTOS! Haha! 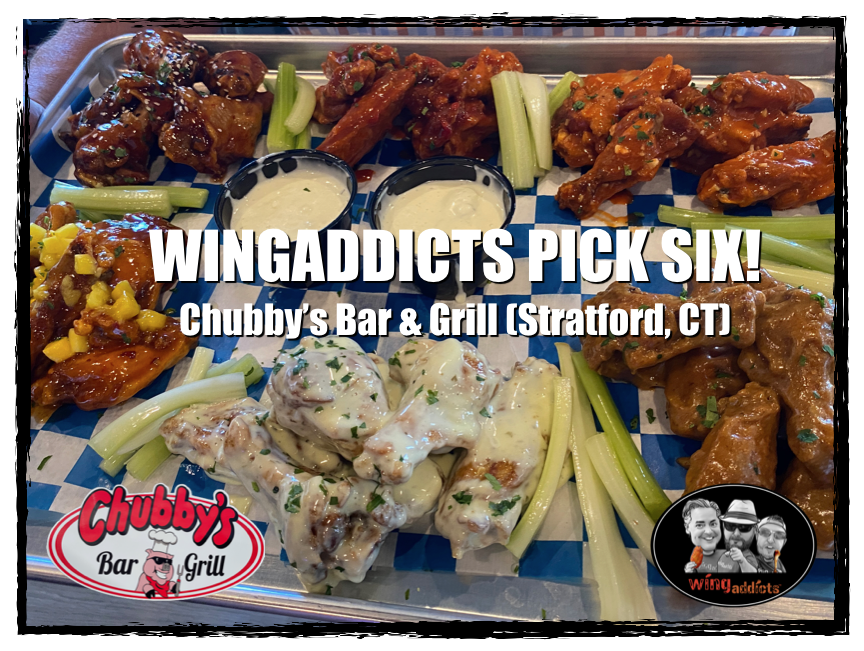 Like our “accidental” AJ’s visit, explained earlier, Doni and I accidentally came upon another spot when the place we were planning to hit wasn’t open (that happened frequently during 20 and 21 because of covid-related staff shortages, etc). So we pulled in, unannounced, to a restaurant in Shelton called Center Street Social. The owner wasn’t there, but the chef Larry Edmonds just happened to be a Wingaddict! And he brought his A-game! We smashed six flavors, all great, and just loved this special Wasabi Ranch creation. Oh, and this bleu cheese was probably THE best I’ve (personally) ever had in my life. Seriously. 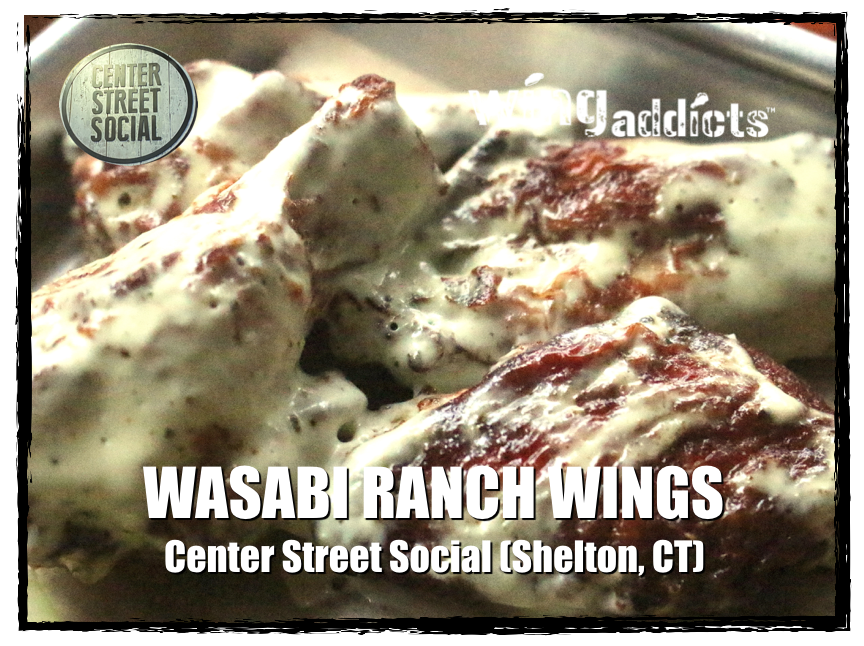 Back in the very early days of Wingaddicts, Doni and I shot a “Wings on the Hood” episode at a spot in Seymour called Pub 67 that was closed to the pandemic and was operating with "takeout only." We shot an episode in the parking lot that day, in freezing cold and windy conditions. The wings actually blew off the Jeep into the parking lot that day. The place was so amazing, though, that we wanted to get back in there to get the full experience. We were super glad we did. Not only were all six flavors excellent, but the seventh flavor came out for dessert and won the day. Just look at these Honey Jalepeno and tell me you don’t want to lick your screen! 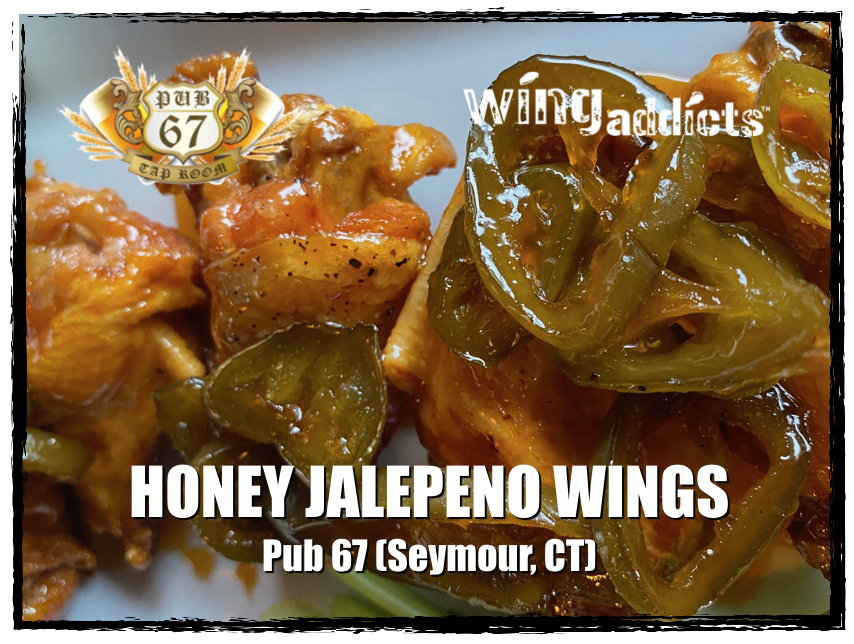 One of the more-memorable stops we made this year was way back in January at a place up in Granby called Four Dad's Pub. We just loved the story of four dad's opening an 80's-themed rock and roll bar. We loved that they love bourbon. And we also got some great posts in Wingaddicts Community from chef Ben Nicholson. We went hard into six flavors, some very unique, and all perfect, and (though it was hard to pick a favorite there) we all loved the Garlic Hot Parm at another level. The Apple Cider wing was one-of-a-kind as well. Another of our all-time favorite spots that we can't wait to get back at RELAPSE! 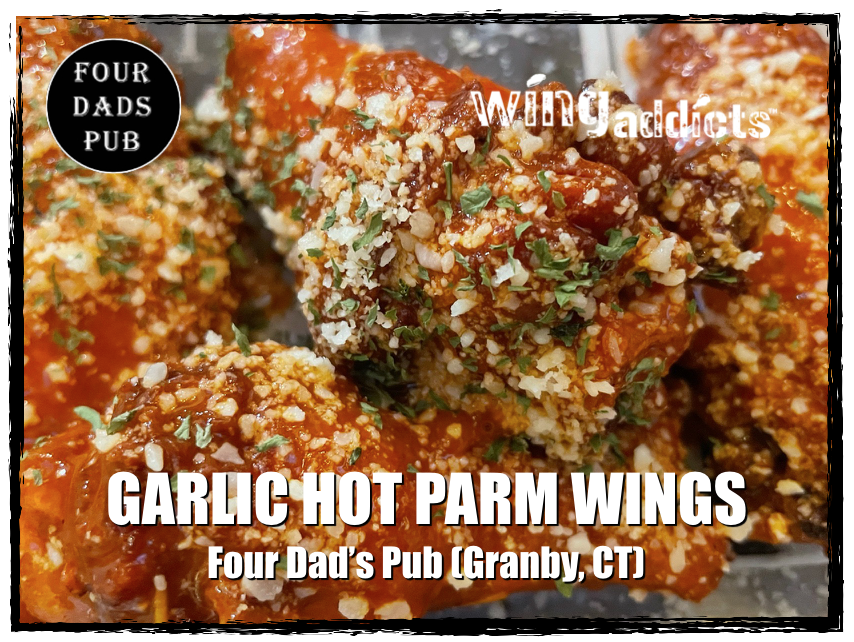 So there’s the first ten which should keep you busy for this week. Put them all on your “to do” list and we’ll be right back next week to give you ten more in Part Two! Wings up!

If you want to follow along with this three-part series, become a member of our email list at www.wingaddicts.com or simply join our Facebook group called "Wingaddicts Community." There we have thousands of chicken wing enthusiasts from (literally) all over the world!  Also, our YouTube channel "Wingaddicts" has over 170 episodes from Connecticut wing spots . . . and counting!