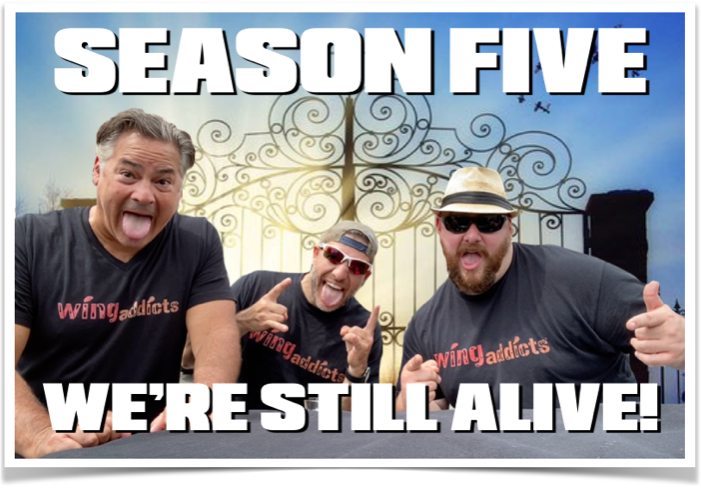 This week, we wrapped up Wingaddicts Season Five:"We're Still Alive" with episode number twenty. Hopefully, you're following along on our Wingaddicts YouTube Channel so you can become the wing "expert" in your circles. As always, we don't "rate" wings with scores, because everybody's tastes are different. But we tell you ALL about what's up AND we get multiple flavors every time.

We made it out to New Haven, Brookfield, New Milford, Newington, Farmington, Black Rock, Barkhamstead, Windsor Locks, Marlborough, Bethel, Thomaston, Meriden and Granby all for the very first time. We also hit new spots in Watertown, Middlebury, and three more in Naugatuck.

So if you're in the area of any of these Season Five spots, give the videos a quick watch before you decide to go there. We'll never lie to you! (Click on the Restaurant's name for the link to that restaurant and click on the photo for the YouTube episode).

We've had a difficult time finding great wings spots in the larger Connecticut cities. Somehow it seems like the national chains like BWW, Wingstop, WingItOn!, and Wings over (fill in the blank) are the go-to's in the city. We wanted to find a solid wing spot in New Haven, right before Thanskgiving, and Wingaddicts Brian Bowden messaged us about JP Dempsey's where he's the head bartender. Great night. Great story! 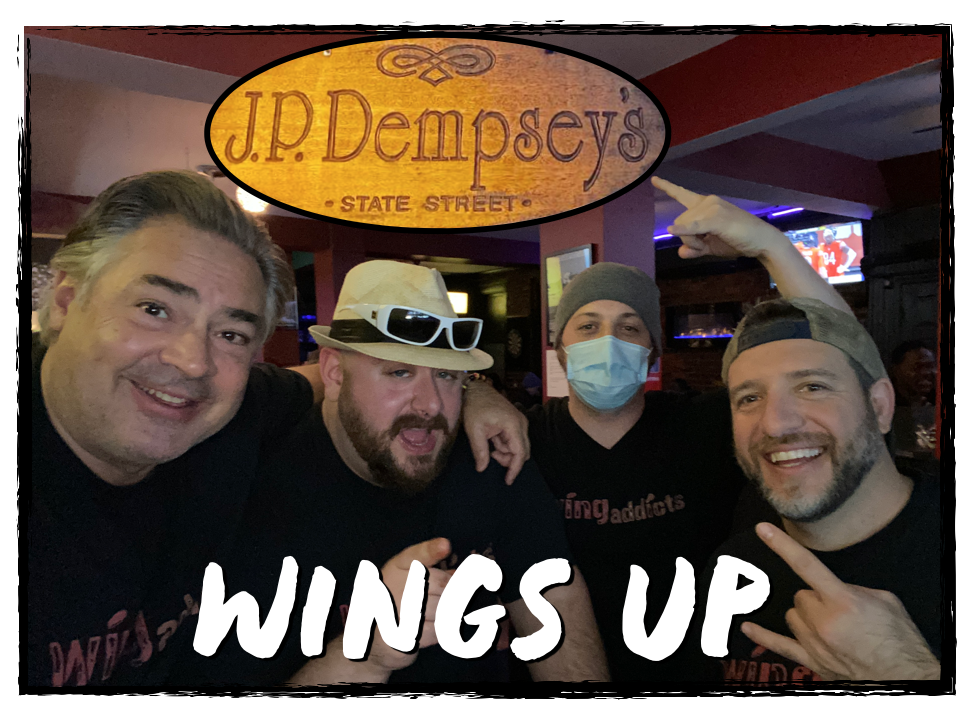 We also wanted to find a spot in Brookfield to eat wings, and were coming up empty. We then found out that Wingaddict Joe Attonito had renovated the old mini-golf course on Federal Road and named it JJ Stacks. It's honestly a place I'd never pull into on a whim. It just doesn't look like it could possibly have wings this good! 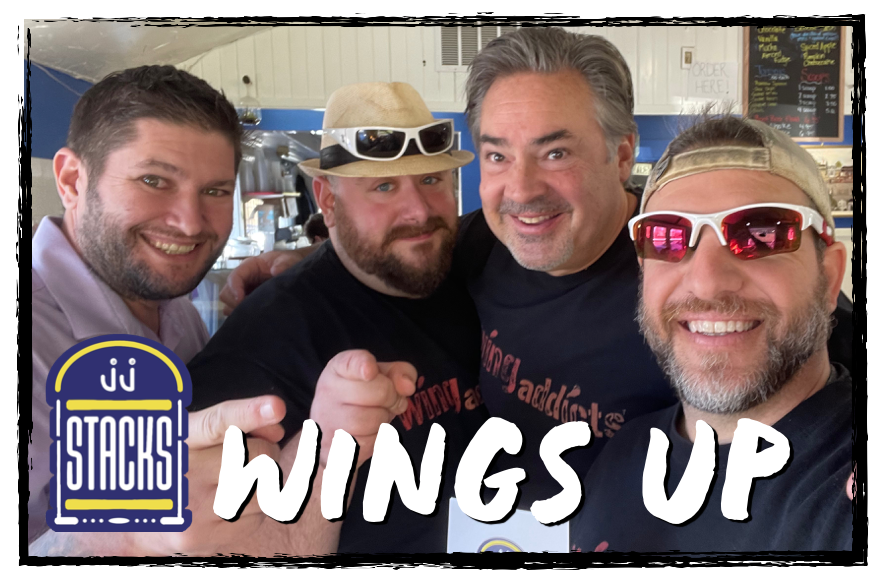 New Milford was another town where we hadn't checked out wings. My good friend Chuck used to own a killer sports bar called First and Ten on Rt 7, and had awesome wings, but that place closed up a few years ago. Well, to our surprise it's been reopened as Scooter's Bar and Grill. They smoke their wings out back. And we found some ridiculous new flavors! #slowdeath 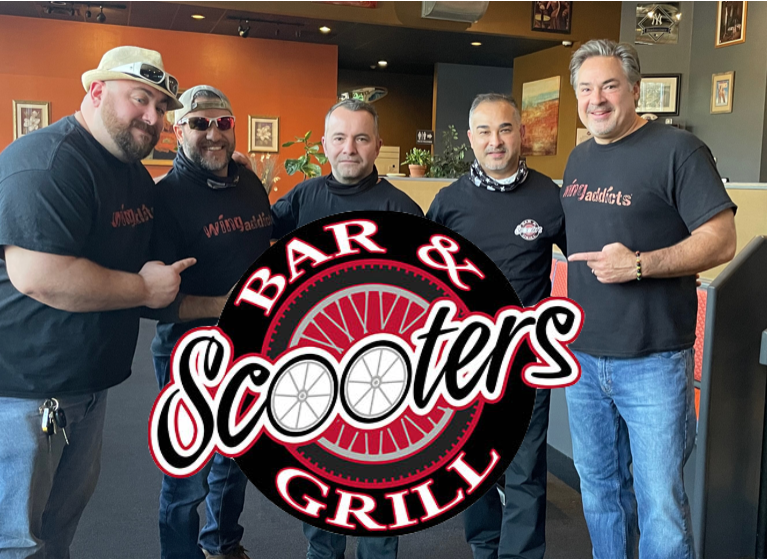 After being featured in The Hartford Courant, we were contacted by Connecticut News 12. Apparently Senator Richard Blumenthal saw the story and wanted to give us a commendation. News 12 wanted to shoot a story as well and asked where we could meet in the Bridgeport area. We had been anxious to check out a place in Black Rock called The Blind Rhino so we called Casey Dohme and they agreed to open an hour early on a Saturday, for the shoot. Along with his partner's Jamie Pantanella and Matt Bocco, these guys blew our minds. They're as good as it gets AND their main location is in Norwalk. Yeah, two Blind Rhino's! 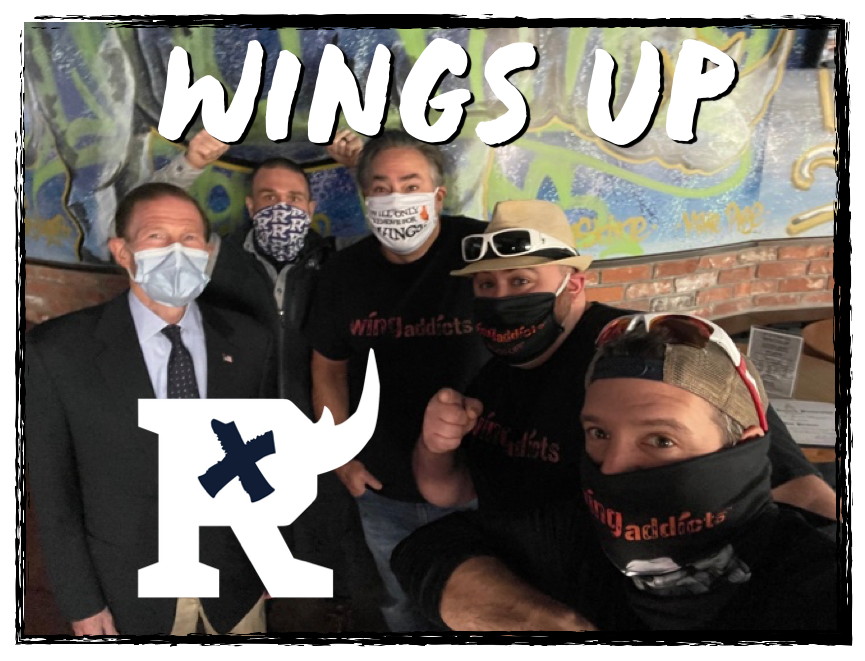 There are so many excellent wing joints in Naugatuck and the community Facebook page is a place where the proud locals like to sound off about their favorite spots. My old friend Taryn Finley and her husband Mike run a spot called American Forged Pub. They had won an award from the Waterbury Republican for their wings, so we had to get in there. God bless America! 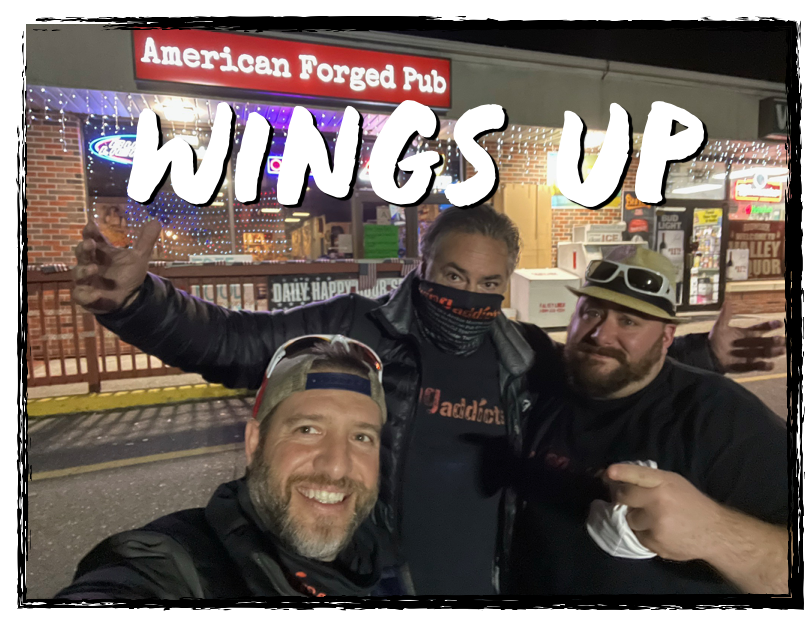 A good friend of my wifes' posted a wing pic on her Facebook from her hometown of Farmington. We'd never done a shoot there so we went over to investigate the scene at Five Corners Bistro. I was surprised when I saw where it was (right around the corner from a Dunkin where I meet up with people frequently). The owners Christos and Despina Theodoropoulos were as friendly as could be, the place was beautiful, and those wings! It was also the first time we'd ever tried a "rum flight." 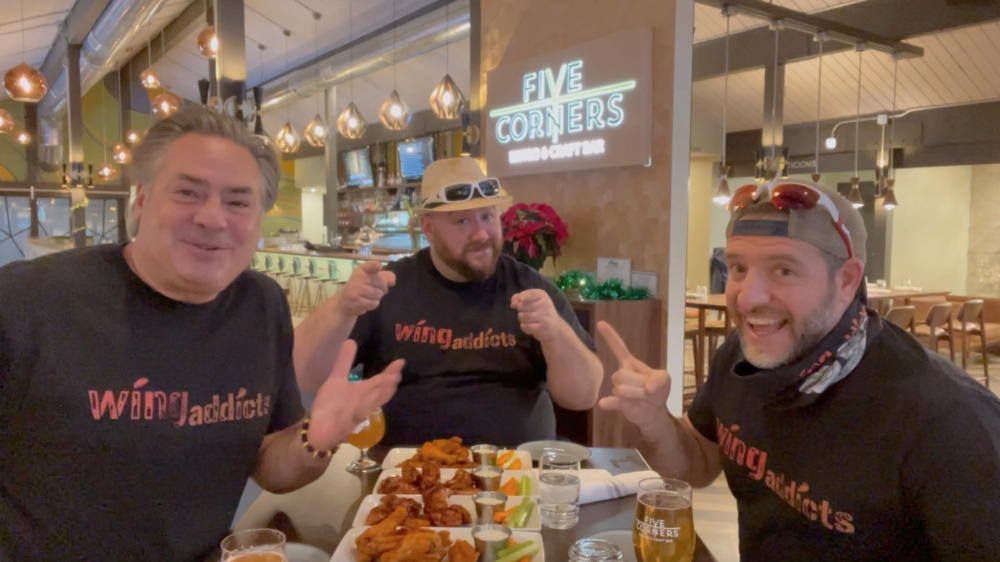 Wingaddict Adam Towers messaged us about his place, the Royal Coachman Tavern at the Old Riverton Inn. First off, I had no idea this town even existed. It's all the way up Route 8, and even though I'd passed through it a hundred times, if you sneeze you'll miss it. Don't sneeze. Adam said he thought his wings were as good as anyone's in the state. He's right. 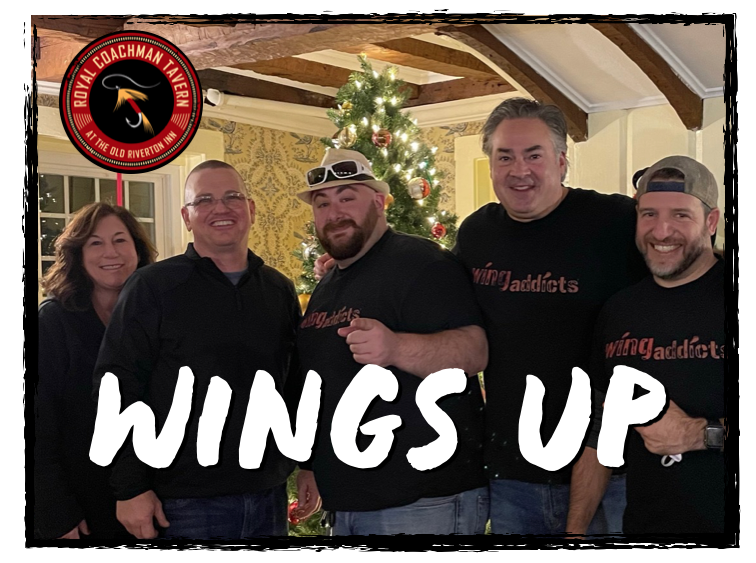 We went right back to Farmington in Episode 8, to a place called Fork & Fire. GM Ruvin Bogati knew about us, and was excited to see us come strolling in. (We often come unannounced) What we found was a really great, relaxing, atmosphere, our first taste of white Alabama BBQ wings, and an overall amazing experience! 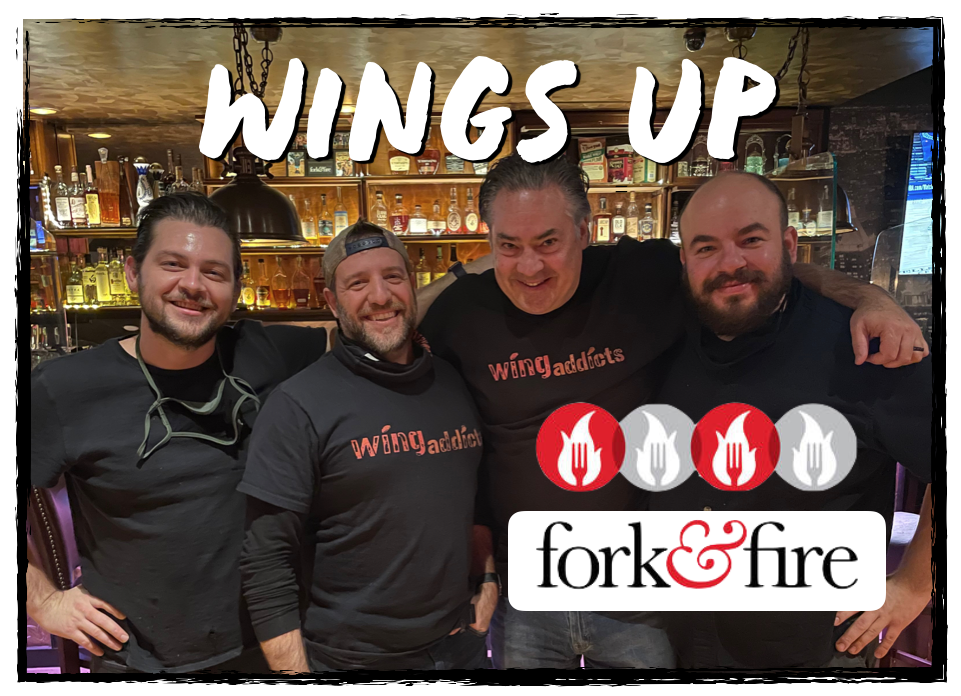 Back in the Naugatuck group on FB, we were insulted for not knowing about The Victoria Inn. "How the hell long have you lived in Naugatuck?" one girl asked me. Well, I don't live there. If I had, I'd have known that this bar has been around for over a century and has a rabid fan base! We checked it out right before Christmas and will never forget the visit! 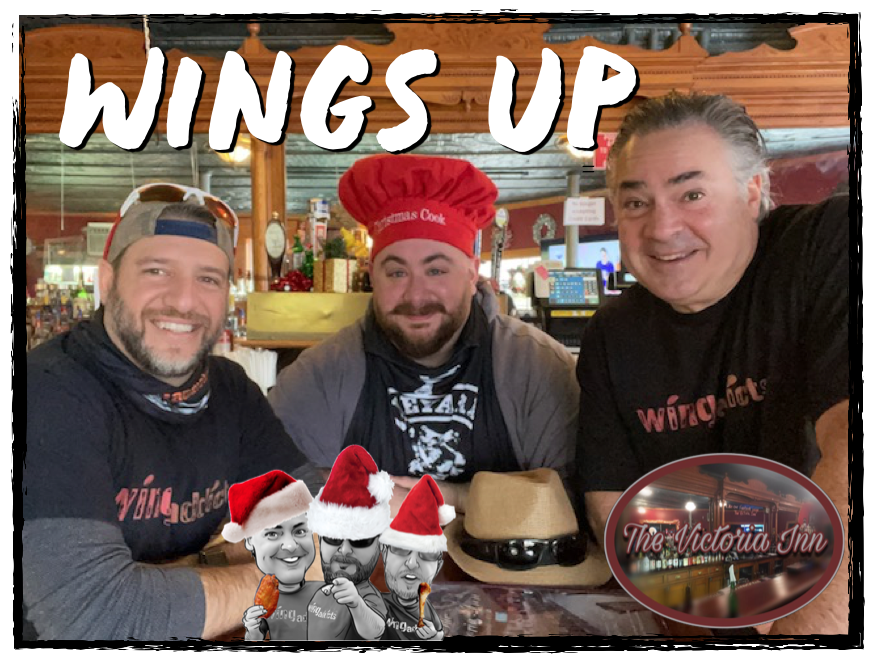 Our friend and Wingaddict Enrico Pallatso has been telling us about The Blackboard Cafe in Windsor Locks. A geographical idiot, I didn't really know where exactly that was but it sounded far. I wish he just told me it was around the block from Bradley Airport. When we walked in he was at the bar in a Wingaddicts tee shirt! Love at first sight! Haha. Then we found out that his real name was Mike and that his Enrico alias was a Leslie Nielson character in the 80's movie, Naked Gun. OMG. Anyway, a bunch of his awesome friends were in the house and we fired down at least eight outstanding flavors of wings! 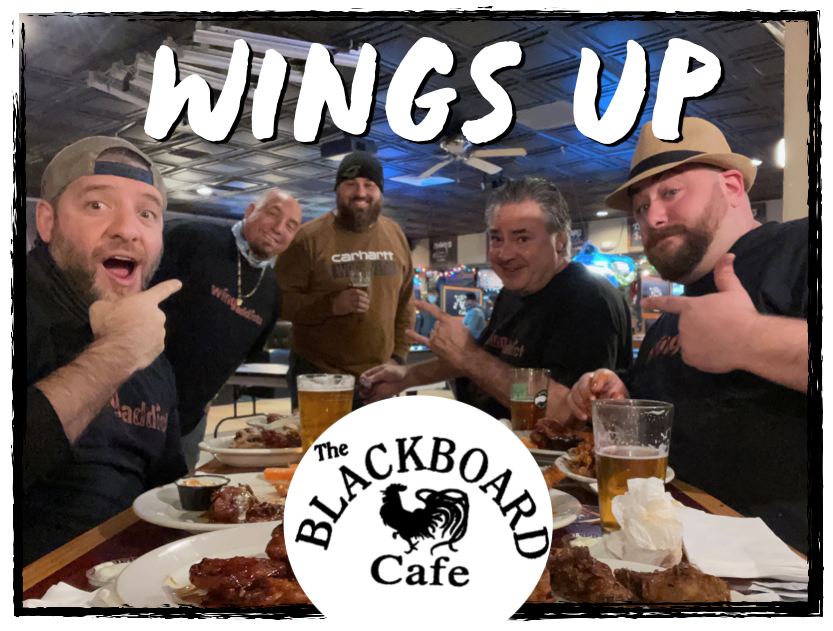 We'll be introducing a new member of the Wingaddicts team very soon (shhhh). We met with him for the first time in the town where he lives, Marlborough. "Where should we meet?" he asked. Hahahaha. We met up at the famous Marlborough Tavern! Andrew Jackson had actually had a beer there back in the 1800's. Wings up! 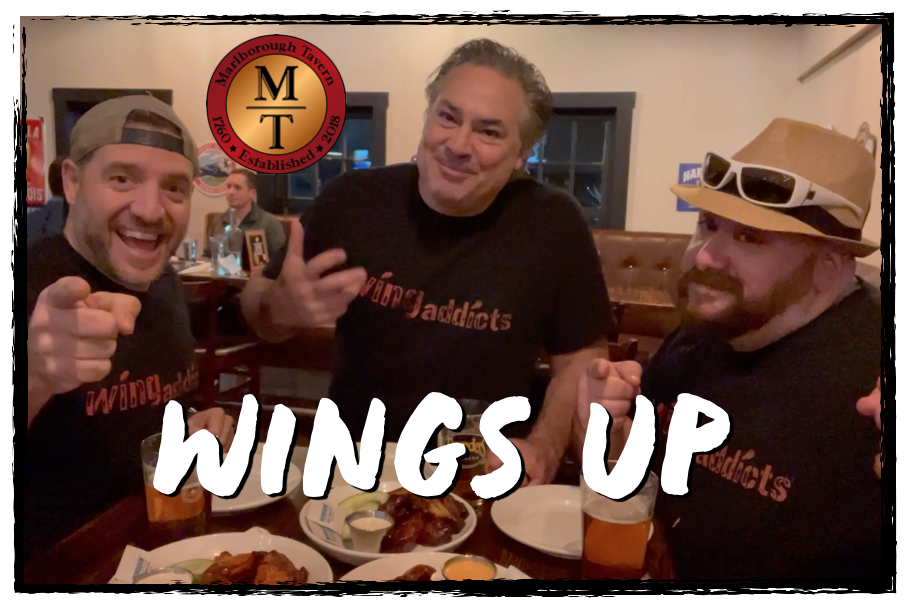 We had been to a spot in Watertown called Triple Play back in an earlier season, and they went out of business. The new spot, 16 Straits Taps & Tavern is owned by the Kotsaftis father and son team and Dean and Andrew. While the old Triple Play wings had tasty as hell, they were breaded and very filling. We (to be honest) weren't real excited about the possibilities. Well, what happened next far exceeded all expectations. Another great wing spot in Watertown (where they love their wings)! 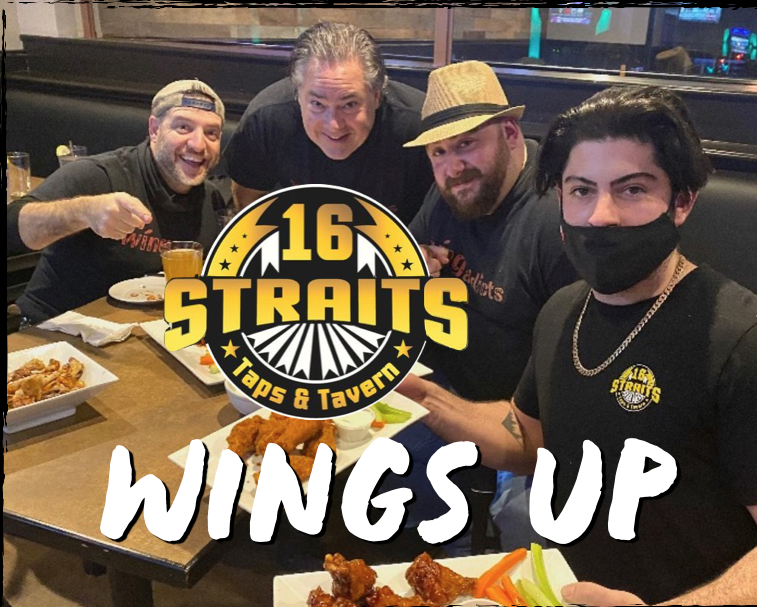 Doni the Cleaner called me one Friday and said he was having his oil changed in Watertown. I went to pick him up and, without Wingchef Ryan, we went for a wing lunch. As we drove towards Torrington, we learned that the pizza joint we wanted to try wasn't open yet. The secondary choice only did curbside. So we rolled to Thomaston to a brewery we'd been hearing about. Also not open yet. Then another restaurant. Didn't have wings! One more spot we'd heard of. Also not open. We FINALLY found Epicure Pizza which had wings on the menu. To be honest, I really wanted to order the lobster roll special. 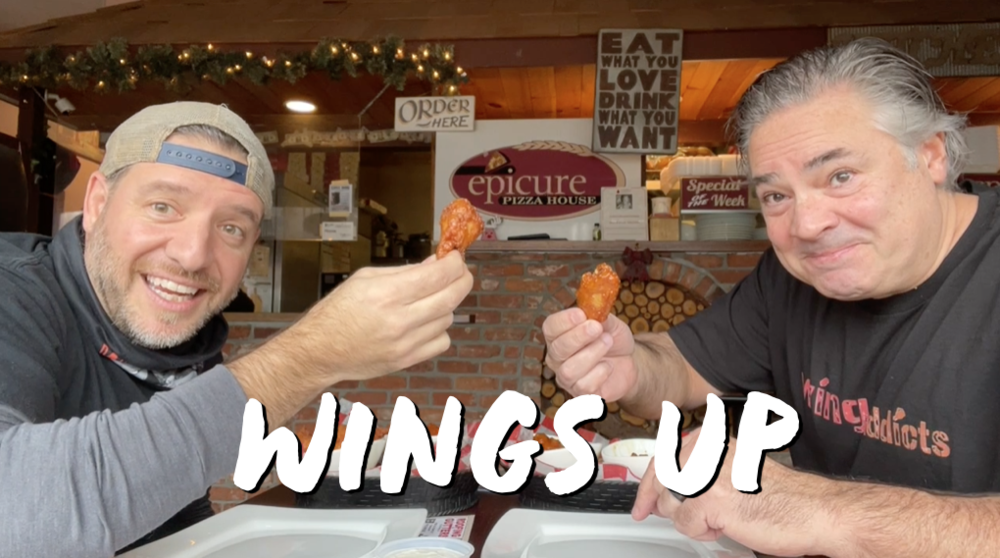 Wingchef Ryan is actually a real chef, with a real job! Since he works until 5 pm in Manchester, we sometimes have to look for a spot up his way when our schedules don't jibe. Hence, we came upon a place called The Flying Monkey Grill & Bar in Newington. They (obviously) didn't know we were coming, and they had no idea who we were (which doesn't happen much anymore!) But GM Veronica Grubin took crazy good care of us and the owner Junior Baez came down to make this a super memorable episode. Oh, the bottle of Flying Monkey wing sauce they gave us to go . . . . I NEED MORE! 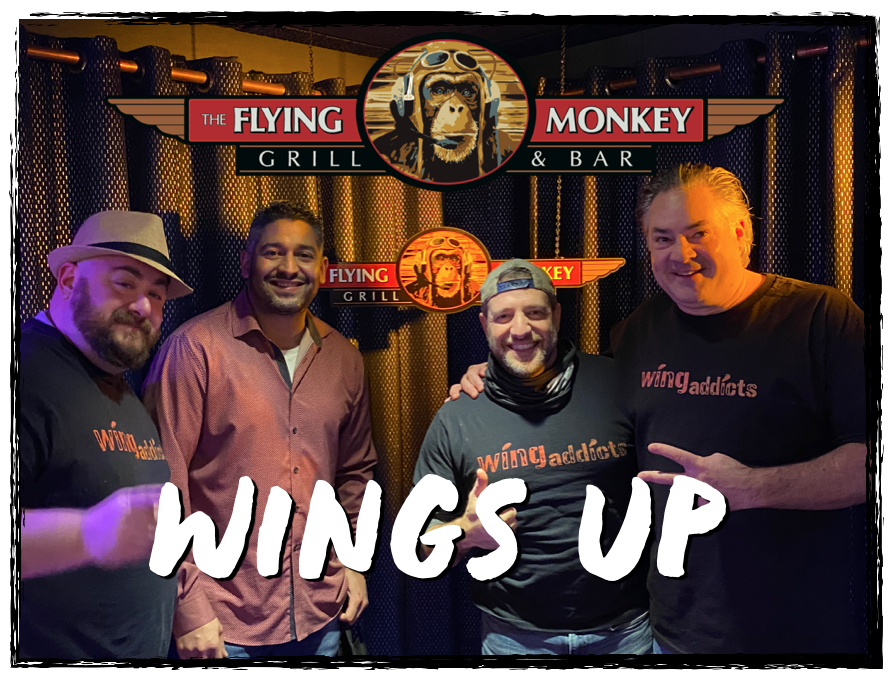 Bethel is a town we had never gone to yet, though we have a few spots on our list. Fellow foodie Eileen Bradshaw-Marchese had posted a wing shot at a place called Notch8 Bar and Grill. We'd never heard of it, but went on that recommendation alone. Another gem of a find! And their chef is a Chopped Champion from The Food Network show! She still hasn't offered to connect us with Guy Fieri or Bobby Flay. (Insert sad face emoji) 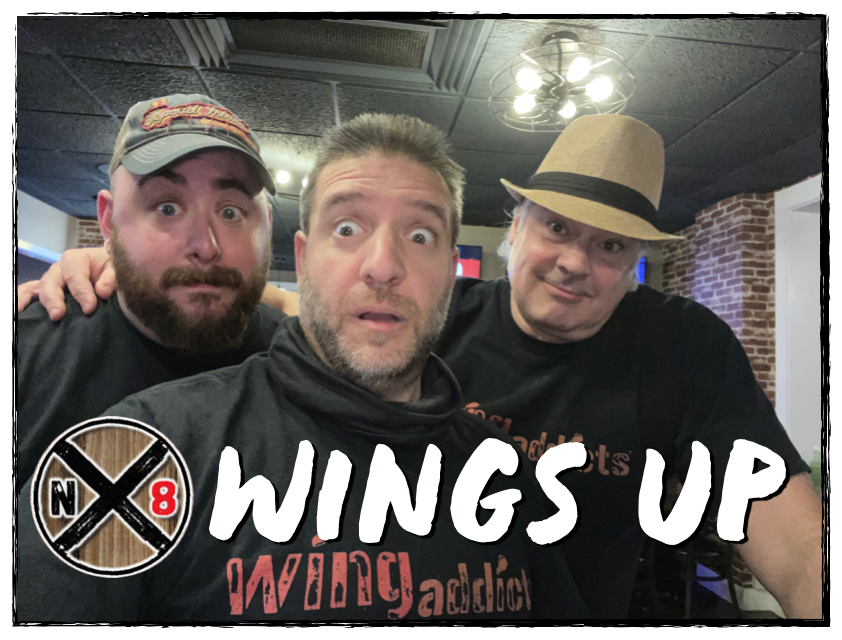 Literally on our way home from Notch8, we headed over to a place in Middlebury right by our houses called 8fifty Wood Fired Pizza. It's a total coincidence that we hit two wood-fired places with "8's" in their name on the same exact night. But this place, connected to the Dunkin Donuts on Middlebury Rd, was under new management and had undergone a big rennovation. They only have one flavor of wings (thank God) but we also had our eyes open to an amazing list of pizzas! Man can not live by wings alone! 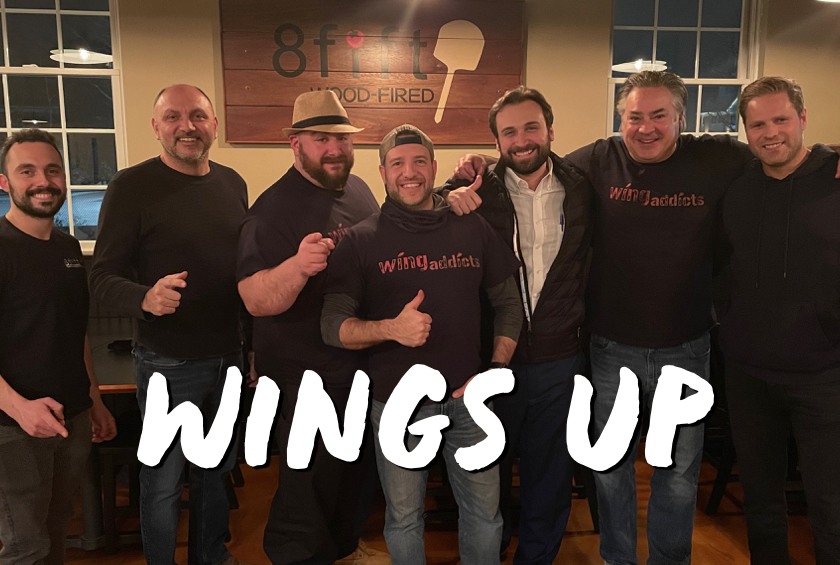 Nobody in his or her right mind would go to a seafood restaurant for wings. But thankfully, none of us is in our right mind. One of our Wingaddicts Dan Brayton, is the head chef at Crabby Al's Seafood in Thomaston. He had been posting wing pics in our "Wingaddicts Community" group that made me want to lick the screen of my computer! Owner Jim Kelley and crew were amazing. And those wings! 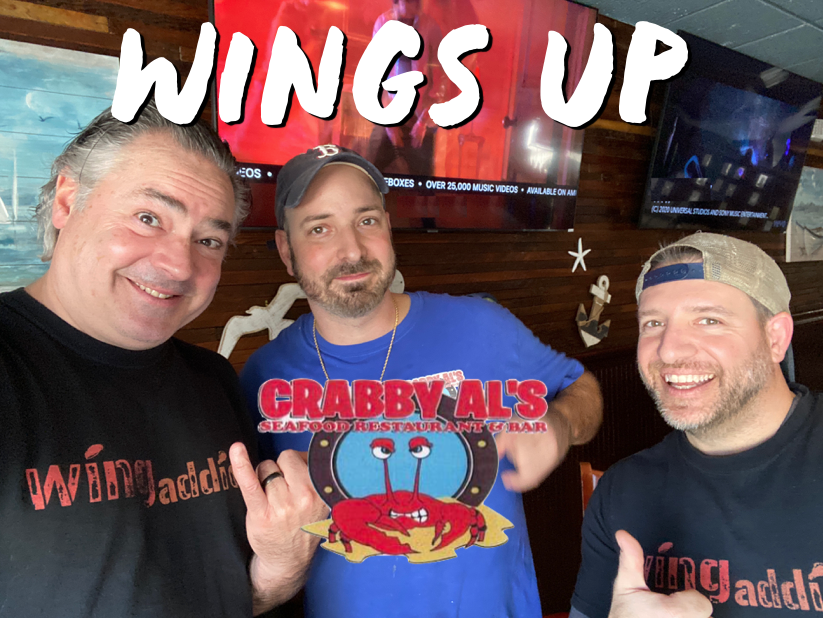 On a dark and stormy night (well, it was dark) we rolled back up to Naugatuck to follow up on a tip for Deeman's Bar. Again, we showed up unannounced and as sometimes happens it would have been better to call first. It was the day after a big storm and their wing order hadn't arrived. So we got in the car and headed back down Rt 63 to another spot, 585 Main. Owner Tom recognized us by our uniforms (haha) and treated us to an amazing selection! Sometimes the best finds happen by accident! 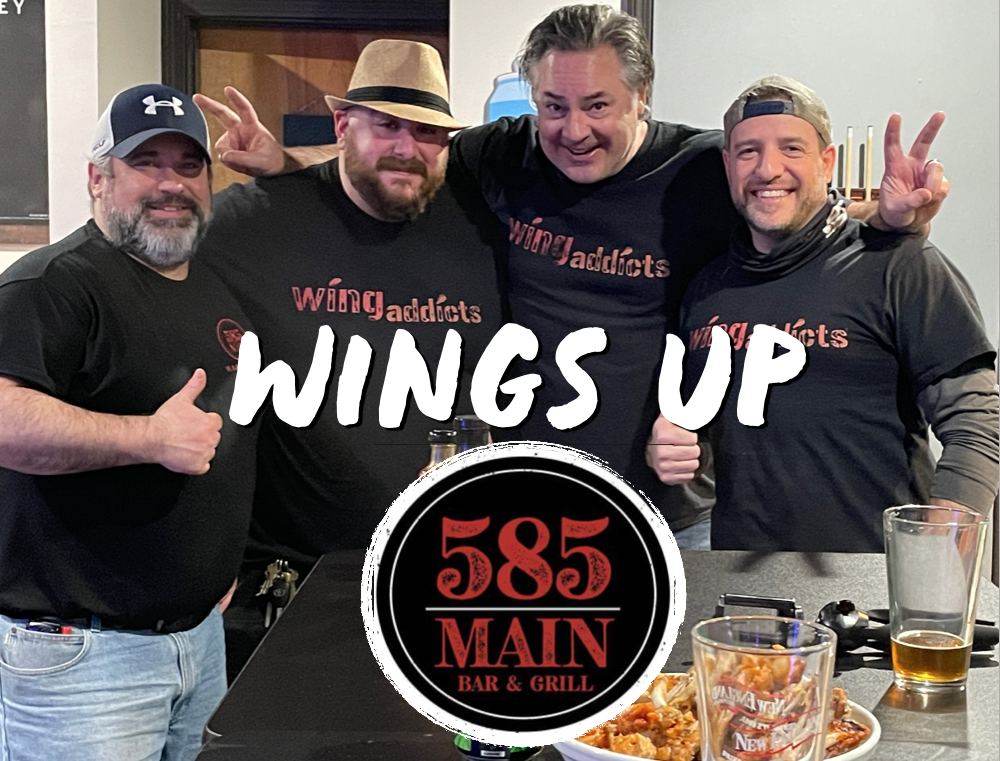 Another mishap occured in Episode 19 two weeks ago. We were headed for The Tipping Chair in Southington because it was a bad weather night. When we pulled into the parking lot, we saw that the place was closed. Our next choice, Wise Guys in Meriden only did takeout. SO, my boy Wags Maheu (who lives in Meriden) told us to go to AJ's Oasis. Hmm. Another spot I hadn't heard of. We were treated like the Rolling Stones when we arrived unannounced, and WOW! 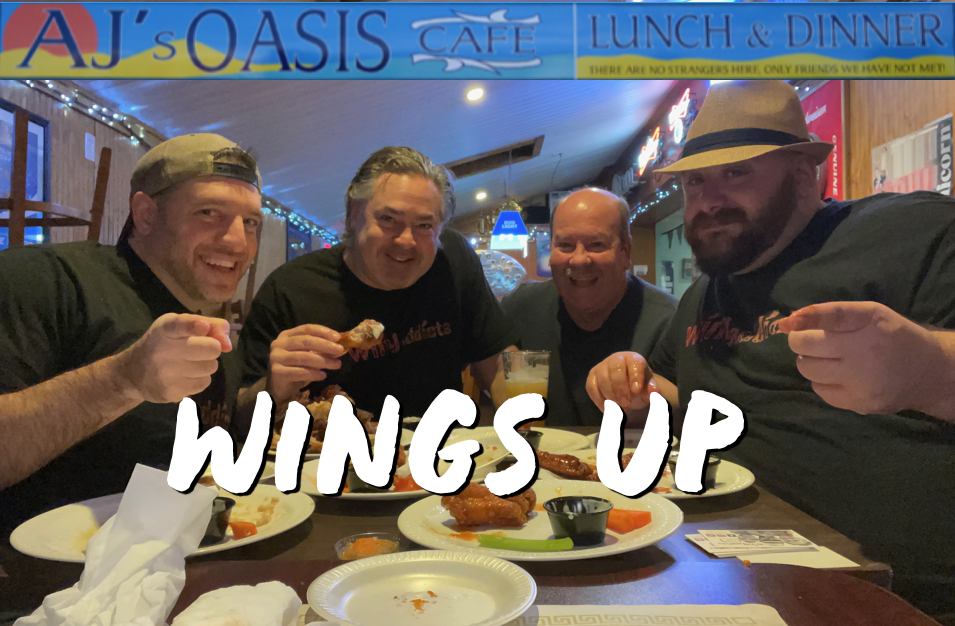 We wrapped up Season Five at Four Dad's Pub in Granby. The only reason we hadn't gone to this place much much earlier as that they aren't open for lunch during the week and they are closed on Tuesday nights, which is normally the night we meet. Now we want to move to Granby, permanently! 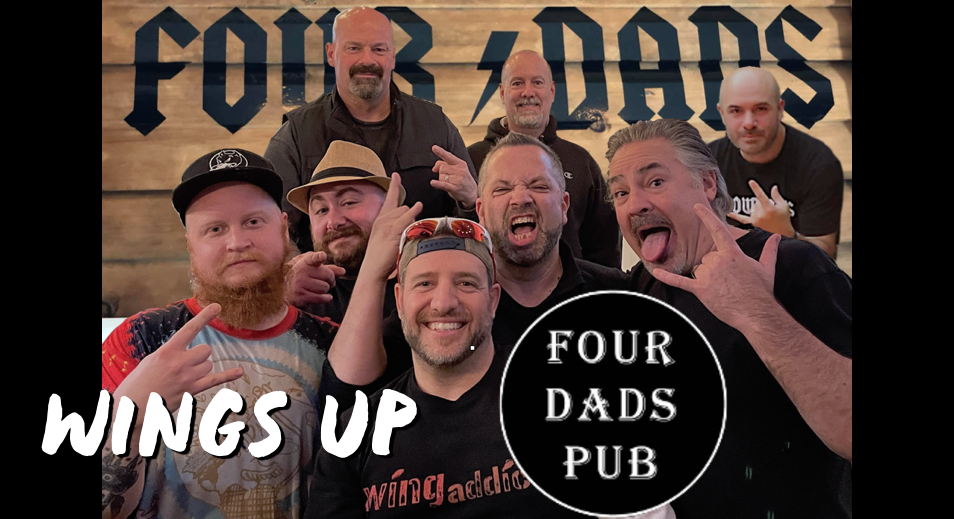 We hope you all enjoy our wing journey, and please know that we want to hear about your favorite places. Yeah, we're kind of limited to Connecticut for now but we plan to spread our "wings" real soon!

In the meantime, we're running a special season called "RELAPSE!" which is a re-vist to our favorite 25 places from the first five seasons. This will be a deeper dive where you can meet the owners, the chefs, see the kitchen, and get the story! We'll carve 25 restaurants into the rockface on "Wingaddicts Mount Crushmore."

Simultaneously we'll continue to explore new wing spots around the state as we launch Season Six; "So Many Wings, So Little Time."  We hope to invite guest Wingaddicts to join us on episodes this season. Feel free to volunteer! 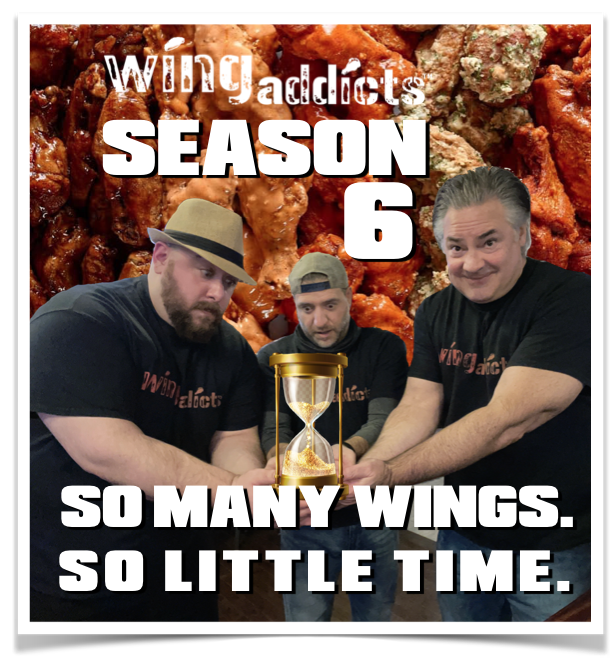 Previous Pizza Joint Wings? Yes or No?
Next Is Naugy the Wing Capital?