Drums or flats? Bleu cheese or ranch? Breaded or naked? These are all timeless and legitimate wing questions to bounce around with your fellow Wingaddicts. But let’s get right to the sore spot; THERE’S NO SUCH THING AS BONELESS WINGS!!!!! 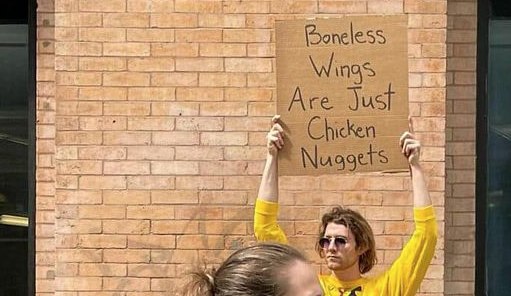 I know. You see them on restaurant menus. Somewhere along the way, some entrepreneurial restaurant owner - realizing that he had a higher profit margin (and probably wanting to reach the U-12 demographic) thought it might be cute to take a breaded chicken cutlet, add buffalo sauce, and call it “boneless wings.” True brilliance. It stuck. 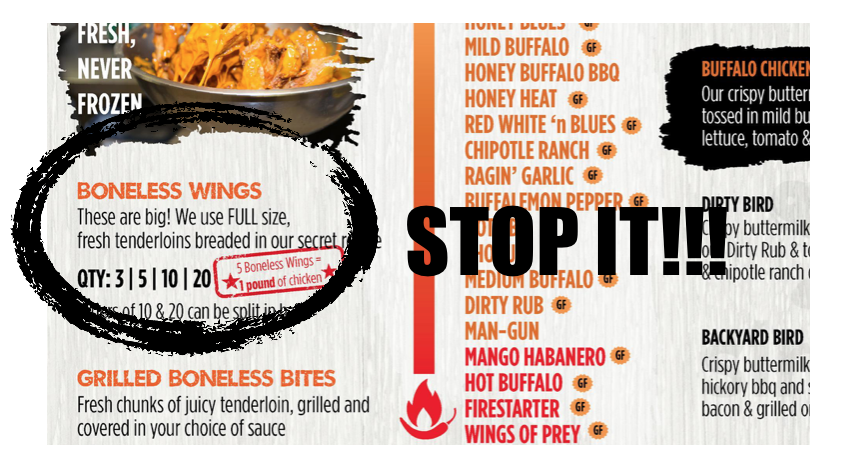 But in Wingaddicts World (party time, excellent), reality is more important than perception. Newbies in our Facebook Wingaddicts Community sometimes take a beating for posting about boneless wings. Don’t believe me? Try it. But it’s a good-natured ribbing. Even the best of us is a sucker for a good chicken cutlet, chicken tender, chicken nugget, or whatever the hell it actually is . . . but come on. Asking for “boneless wings” is the same as ordering a unicorn sandwich. Its fiction. 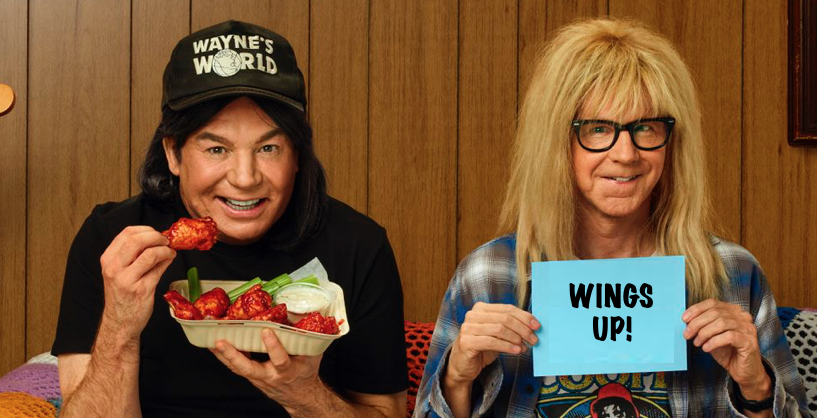 Last year, a true hero named Ander Christensen actually showed up at a city council meeting in Nebraska to argue this fact. His speech went viral mostly because of how it mocked our country’s worthless political system. But he’s right. On both points.

Here were his arguments. “Number one,” he said, “Nothing about boneless chicken wings actually come from the wings of a chicken. We would be disgusted if a butcher was intentionally mislabeling his meats but then we go around pretending that the breast of the chicken is actually its wings?” 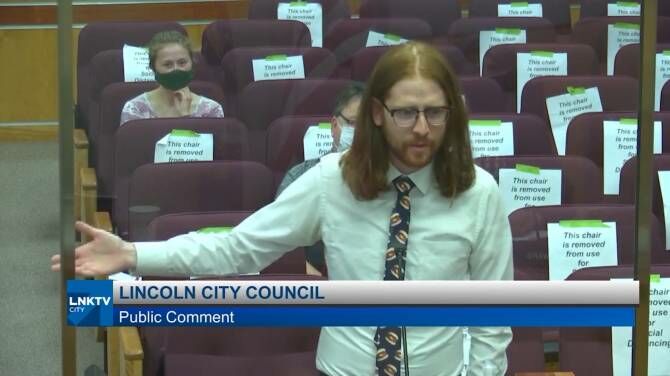 “And number three,” said Christensen, “We need to raise our children better. Our children are raised being afraid to have bones attached to their meat. That’s where meat comes from. It grows on bones. We need to teach them that the wing of a chicken is from a chicken. And it’s delicious.”

He then proposed that the city of Lincoln, Nebraska stop living a lie. He proposed calling them “buffalo style chicken tenders,” or "saucy nuggs.” He plead that we could take these steps and show the rest of the country that we’ve been living a lie for far too long. “And we know it,” he concluded, “because we feel it in our bones." 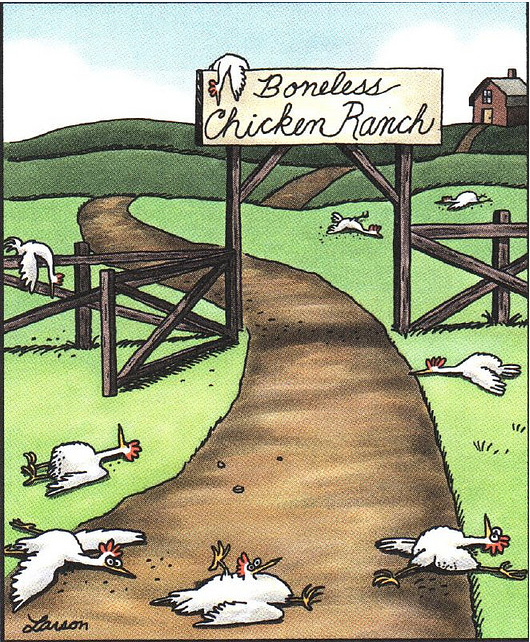 Studies have actually determined that 100% of chicken wings have bones. It would be difficult, if not impossible, to remove those bones before cooking without just having small chucks of raw chicken meat. Now a true Wingaddict can de-bone a wing with a few simple twists after its cooked. That’s another blog post for another time.

Is any of this important? Hell no. Call them whatever the hell you want! It’s just a source of comedy and conversation and since nobody ever taught this to you in school, it’s proper Wingaddicts etiquette. Now you know.

Oh, and there’s no such thing as chicken fingers either! Don't get me started. Wings up! 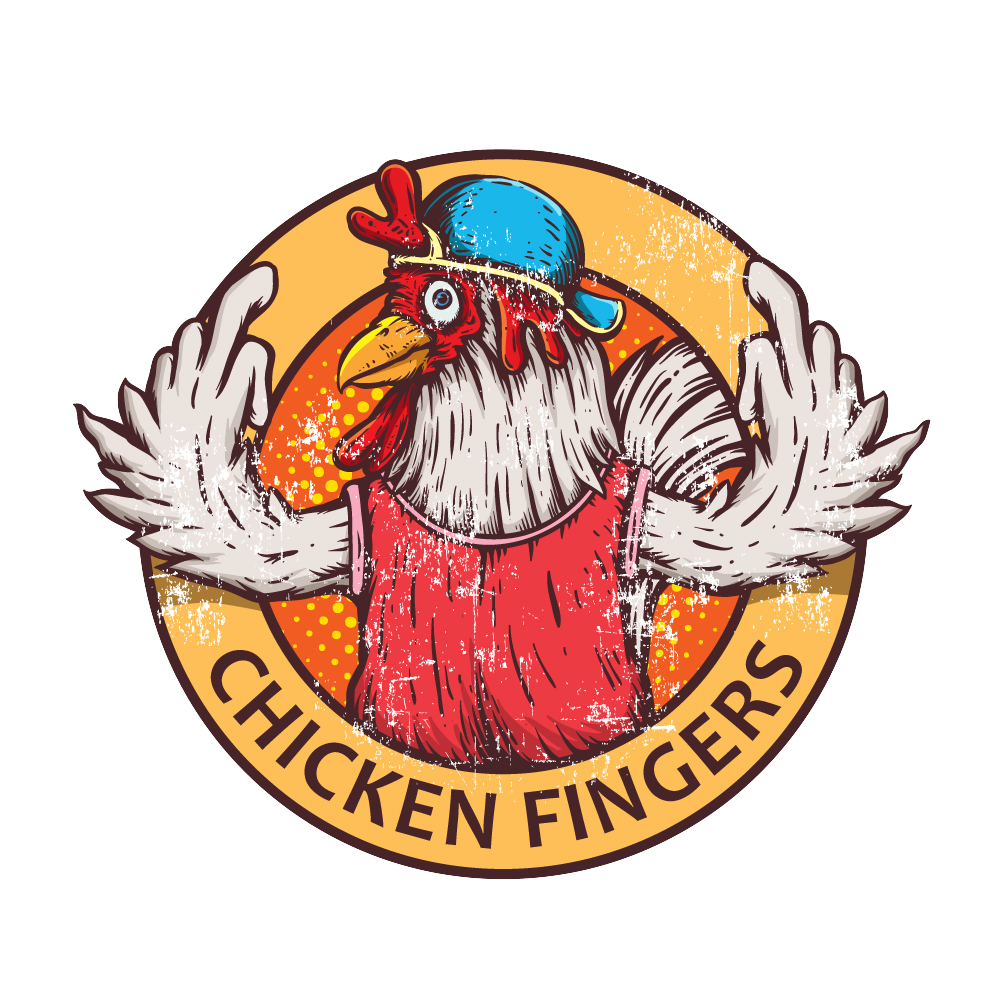 Previous FULL SEASON SIX RECAP
Next Legend of "The Boneyard"