So, as 2021 comes racing to an end we now look back on 68 different restaurants we visited this year, the 404 plates of wings we destroyed, and all the new flavors as we ran our two-year total to 357! Can you even fathom 357 different flavors of wings?

Nobody would read to the end of a blog that featured 31 different wings, so I’ve decided to break it up into three different weekly posts. Consider this PART THREE of the 31 in 21 series.

Combined, Doni, Wingchef Ryan and I have probably eaten wings at TK’s American Cafe in Danbury close to 50 times. It has a special place in my heart because I drank 21 shots there - of whatever 21 year olds drink (mostly schnapps and Jagermeister) - on my 21st birthday. I heard I had a great time <smile>. 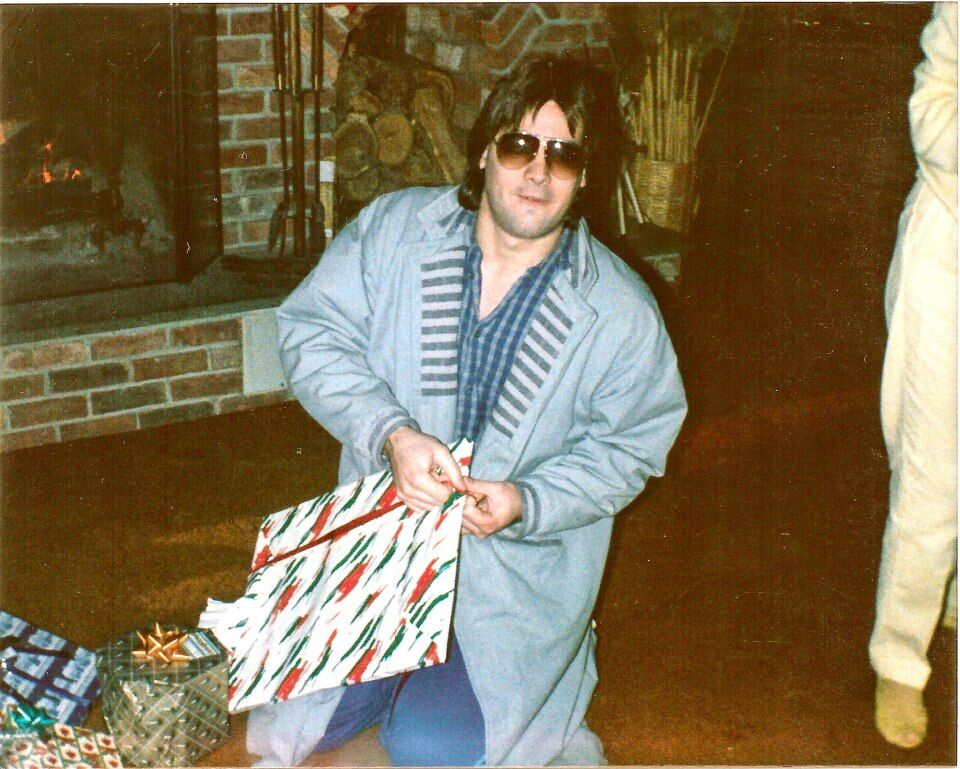 But last April we officially added TK's to our Wingaddicts Mount Crushmore as we shot a RELAPSE episode that this historical spot. TK’s wing flavors are a crazy combination of different sauces and different Wingaddicts have posted different favorites. One of ours that day was the Ugly Elf, inspired by Wingaddict Expert, Effie Foster. This wing is a semi-hot combination of Cajun, Teriyaki, and Honey Mustard. Loved it! 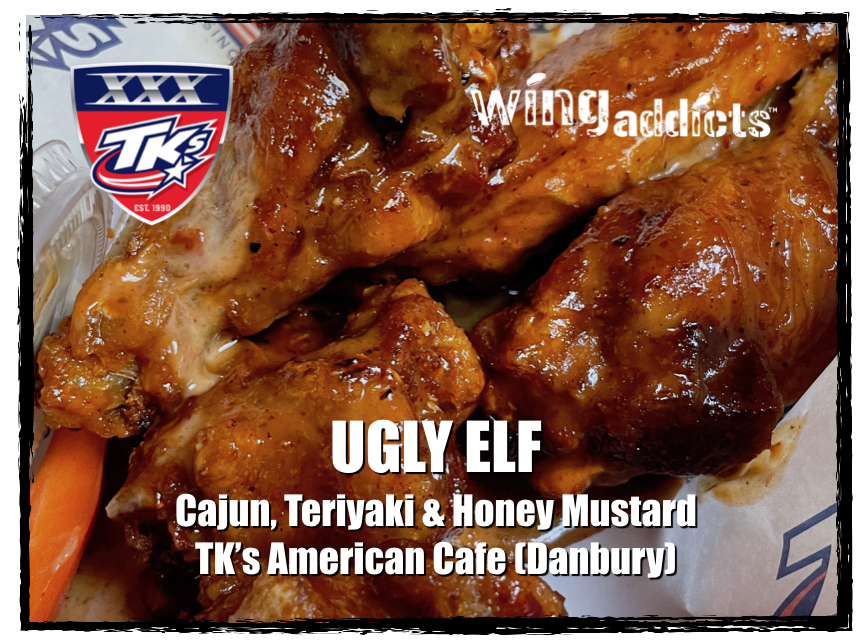 We also rocked out a RELAPSE episode at the “also historical” Sliders Grill and Bar in Plainville, CT. Again, we’ve probably enjoyed twenty of Sliders' thirty-something flavors (and loved most of them) but on this particular visit we were floored by the Buffalo Bacon Ranch. It honestly doesn’t sound like a flavor I’d be particularly interested in. But my brain and my tastebuds aren’t always in harmony. Well, they are now! And what's more, you can get this wing in any one of Slider's five Connecticut locations! Wings up! 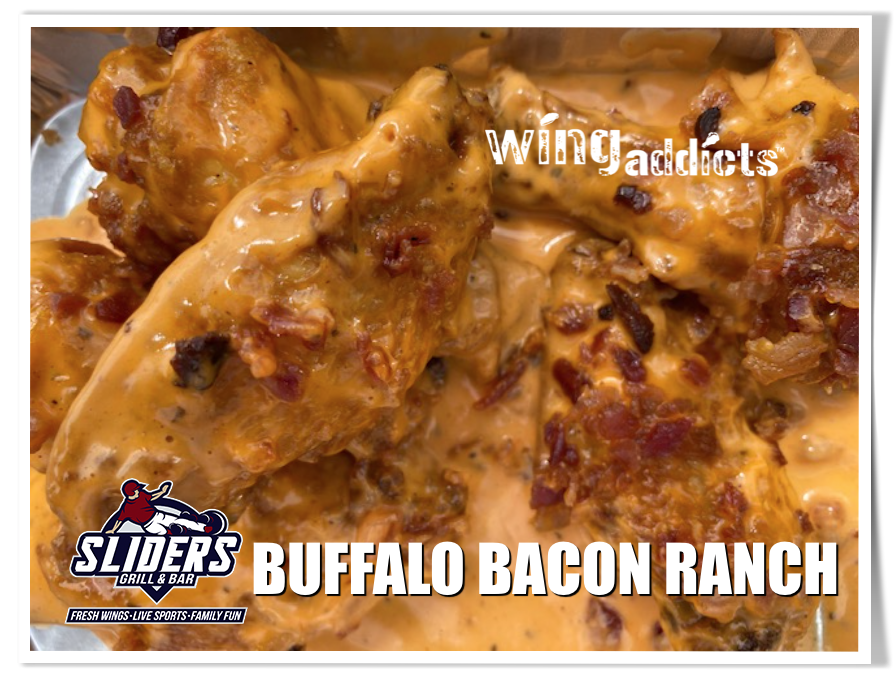 OK, through this three-part blog series I’ve disciplined myself to only pick ONE standout flavor that was special at a particular restaurant visit. However, I’ve never been one to follow rules or guidelines and I’m breaking out of that cage because of Kevin Reid over at Reid’s BBQ in Derby. I still lapse into a mental food coma (only slightly different than an actual food coma) when I think about our visit there last spring. HO-LEE-CRAP! We enjoyed six flavors, all smoked on the pit including Habanero, Jerk, Carolina BBQ, Buffalo, Spicy Honey BBQ, and Smoked Ginger Teriyaki. If they don’t have all six of those in Heaven, I’m going to ask God if I can go back. Because I appreciate you (the reader) I’m going to give you TWO of those to look at.

A super cool restaurant and an excellent wing spot that doesn’t get much attention in our Wingaddicts Community on Facebook (don’t know why) is Redding Roadhouse. We went there on a Sunday during brunch hours and had our way with eight amazing wing flavors. Again, it was difficult to pick an absolute favorite because they were all quite amazing. However, the uniqueness of these Gochujang Wings was impossible to forget about. 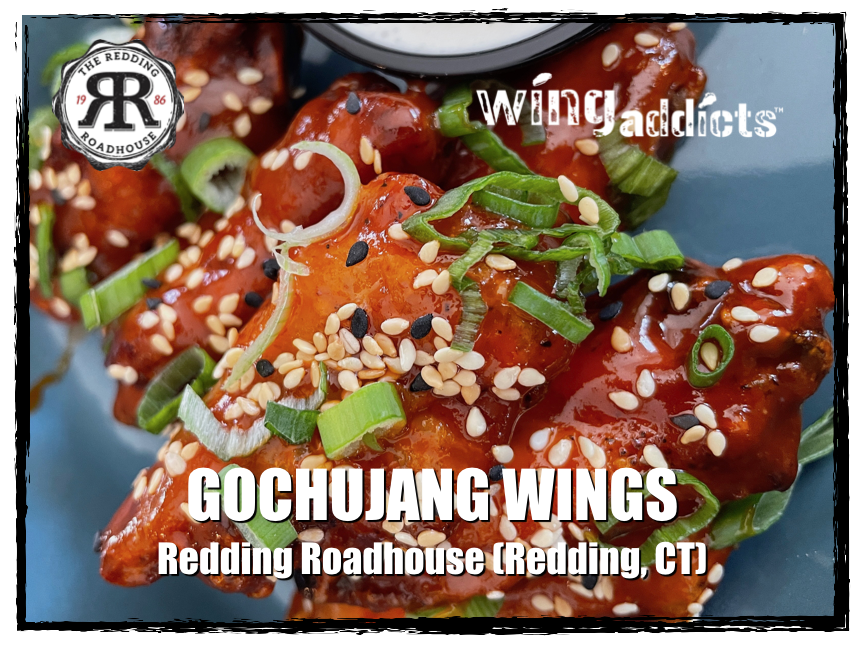 During another RELAPSE episode we went back to revisit the famous Porky’s Cafe in Shelton. The undisputed local favorite, Porky’s only has four sauces on its wing menu. But only a true Wingaddict would know that you’re allowed to mix-and-match. How good could it be? Well, we learned that the Triple Dip was a top seller so we went with it. The answer is “yes!” This wing is a combination of Buffalo, BBQ and Spicy Thai and was our favorite too. “It’s smokey, it’s glazy, it’s spicy, it’s buttery,” was how Wingchef Ryan explained it. My explanation is simple, “It’s freaking awesome!” 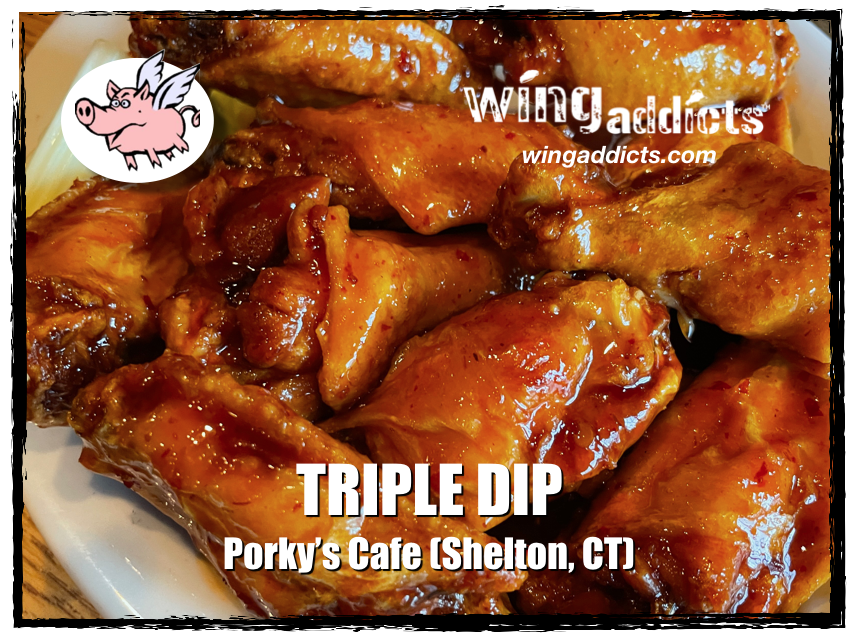 It shouldn’t be a surprise that another MVP wing of the year came from another RELAPSE episode. After all, RELAPSE is where we go back to the best wing spots in the state! This most-recent episode was at Groggy Frogg in Southington where they had just captured a bunch of awards at the town’s annual Wing Fest. Another top-of-the-heap wing joint where they have over 70 flavors, the Frogg treated us to some of the newer flavors that won at the contest this year. Since those aren’t on the menu, though, we’ll share one that (we think) is. This Cranberry Pepper Jam wing with a cream cheese aoli was both unique and mind-blowing. You won’t go wrong with any of the others, but give this one a spin too! 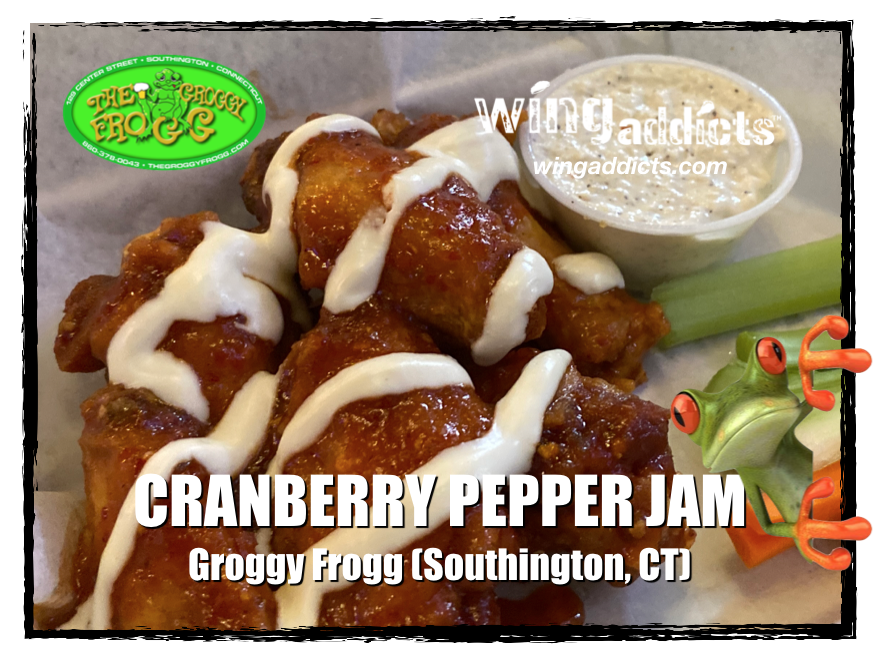 Just barely up the street from the Frogg, you'll find one of Southington's very best pizza joints called The Fire Place. It's such a local hot spot for pizza that the average person might completely overlook the wings there! Luckily we are not average people! This place has its own special sauces and dry rubs (all amazing) but this Spicy Garlic wing. Oh dear lord! Just look at it. It tastes as good as it looks! 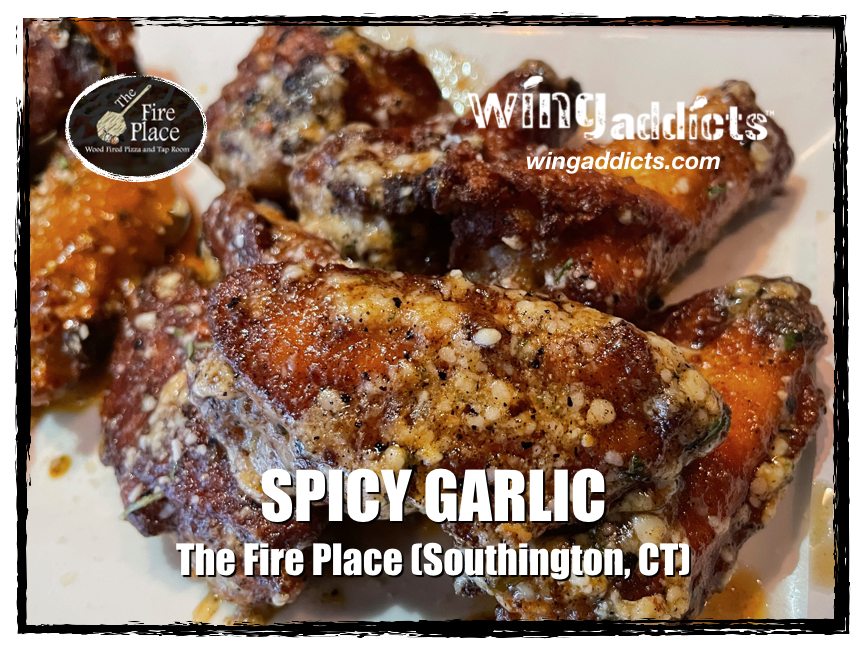 We had mixed reviews when we said Wingaddicts Season Seven was going to be dedicated to “Pizza Joint Wings.” We even had arguments among ourselves. But our path was lighted with some absolutely amazing beacons, including Cheshire Pizza & Ale in Cheshire, CT. After an assortment of incredible wing flavors, its hard to believe that we devoured other appetizers, sandwiches, and pizza that night as well. ALL excellent by the way. In fact, Doni texted me just yesterday and told me he was thinking about that chicken sandwich! The wing that stood out best for us, though, had to be the Bourbon Maple Bacon. Sweet, savory, salty, and delicious. Drooling. 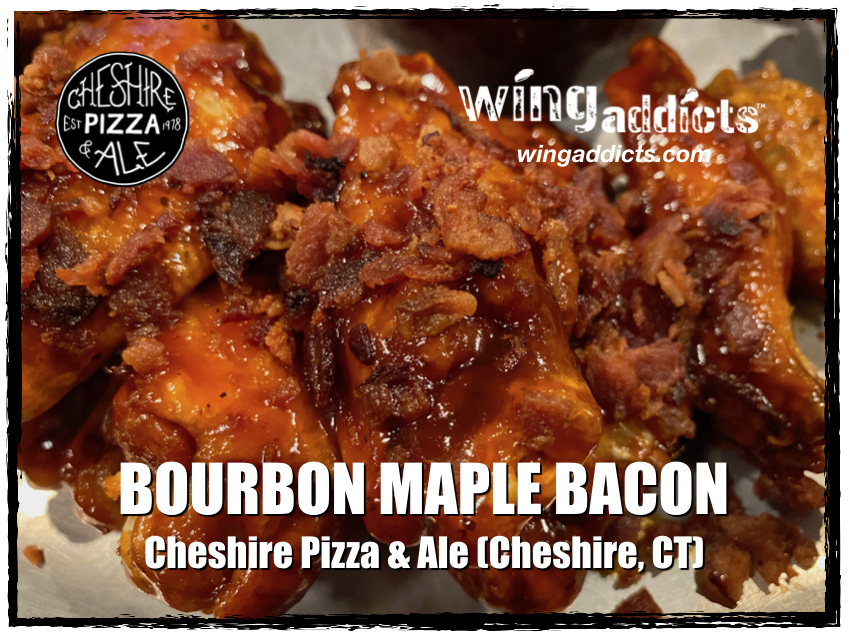 Fire Engine Pizza Co, was a stop on that same tour. I probably had the best mashed potato bacon pizza of my lifetime but let’s remember who we are here! They only have TWO wings on their menu. Well, not two wings, but two wing flavors! To be perfectly honest, the Buffalo wings were great but very average. However, flavor number two . . . Sweet Asian, was a huge keeper. I’ll be back there slamming these babies again! They also have a second location in Bridgeport. 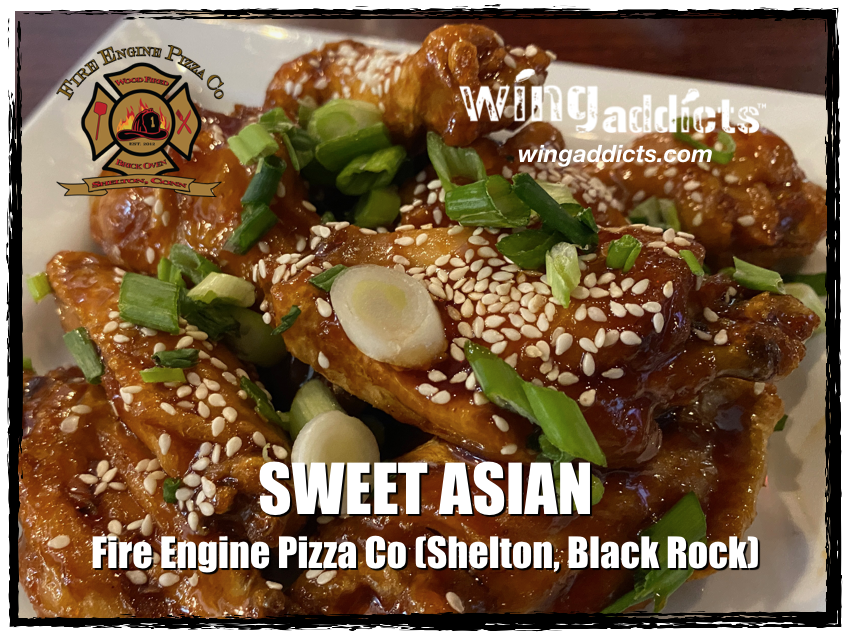 Wanting to find a spot in Thomaston, CT we started off 2021 at a place at an unlikely restaurant (an actual seafood spot) on the recommendation of chef and Wingaddict Dan Brayton who was posting pictures of his wings frequently. What an amazing experience we enjoyed at Crabby Al’s Seafood all around! Wings aren’t necessarily the specialty there, and the wing list is limited, but if you make a special request . . . make it this one! Come on man! Flaming Raspberry Cuervo??!! 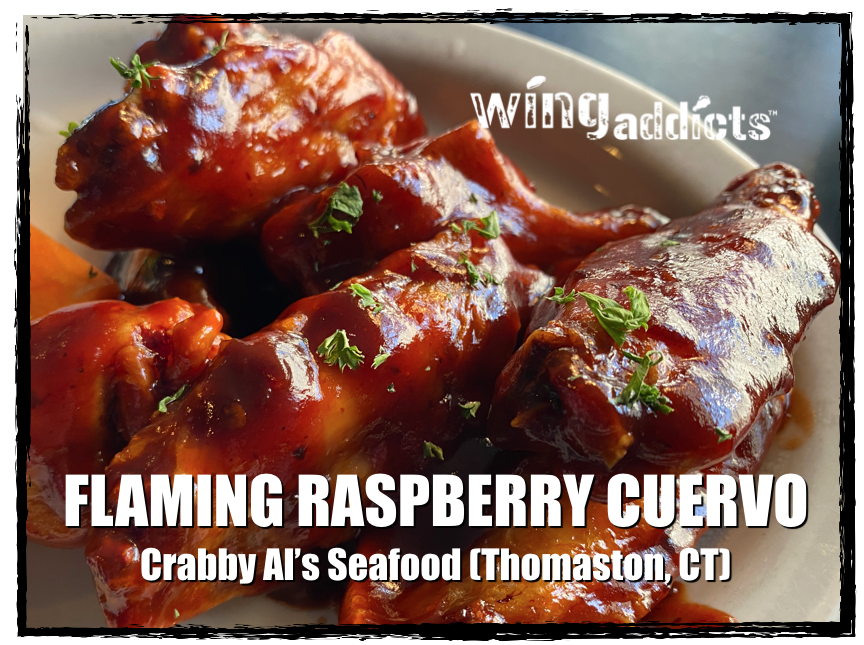 So that closes out the list of 31 of the most-memorable wings we enjoyed in 2021. But wait. Back in part one of this three-part blog, I made the comment that the year wasn’t over yet and I reserved the right to add any new faves we might encounter. Well, guess what? It happened.

Coals Pizza, a new restaurant that opened in Norwalk earlier this year, not only serves a unique (and delicious) grilled pizza - but it also serves grilled wings! Ryan, Doni and I had to fight it out in a steel cage to determine the better of the Grilled Buffalo, Rosemary Maple, or Cilantro wings. Doni threw us both over the top rope, and we ultimately agreed on this one. Wow! Coals also has locations in Bronxville, NY and Portland, ME. And if you get wings and pizza (which we highly recommend) ask about "The Coals Roll!" 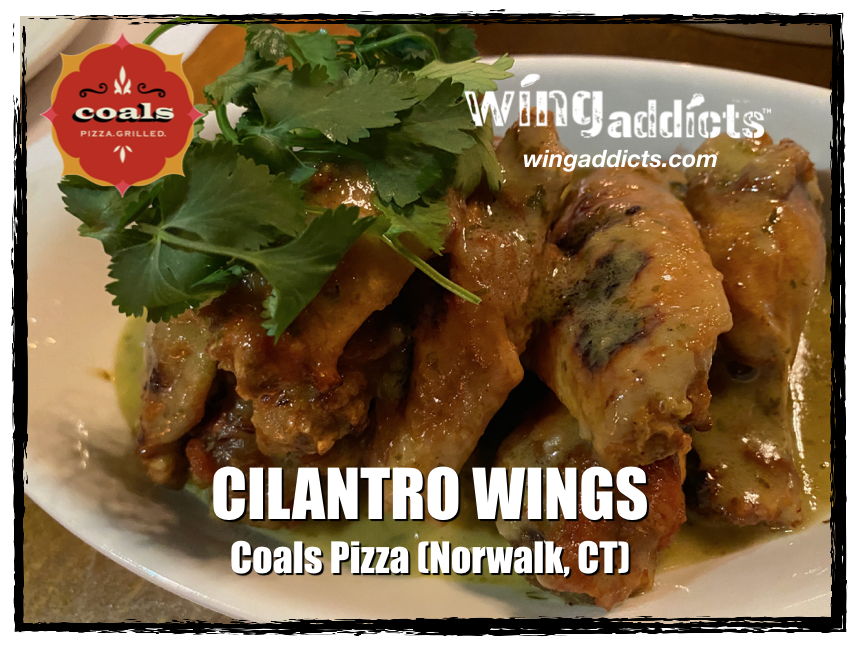 So there you have it, Wingaddicts! Of course there were other exceptional wings we devoured in 2021, but this list of 31 (well, actually 33) is the absolute best we could do to trim it down for you. Do yourselves a favor and put them all on your “to do” list for the upcoming new year and you won’t be disappointed! Meanwhile, we’re looking forward to closing out the year strong and then starting “Something New in 22!” Sounds like an interesting title for a new season!

Our Wingaddicts blog is posted weekly on wingaddicts.com. Go back and view old posts to learn everything you need to know about wings! Also, the “Wingaddicts Community” group on Facebook is mentioned frequently. That’s our greatest forum for people all over the world to share their wings and wing stories! We have all 50 states and 17 different countries represented there. You can also find Wingaddicts episodes on YouTube, find us on Instagram and TikTok.