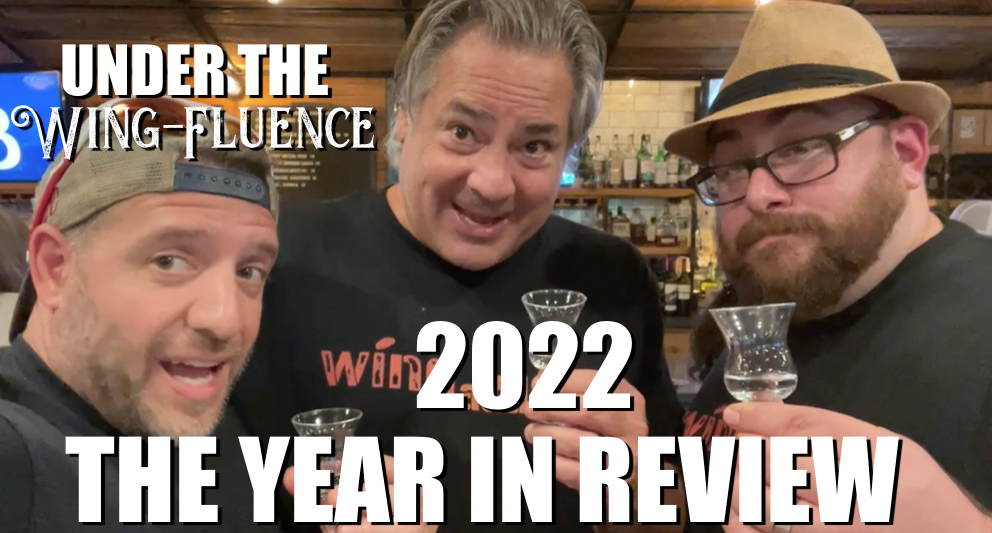 As we reflect back on the year 2022, our third full year at Wingaddicts, what a special year it was. In the spirit of all the “Year in Review” recaps we’ll all be forced to endure for the next week, I thought I’d beat them all to the punch! Indulge me!

We started the year off by soft launching our ever-improving Wingaddicts App (free in your app store). The app automatically shows you the wing spots within a ten-mile radius of your physical location. It also has a “Wing Explorer” that lets you find wings anywhere. You can add restaurants if they aren’t on the app yet and you can post your own photos and reviews and earn rewards points. There’s also a tab for sauces, rubs and recipes where you can save them to your favorites! In the first year we're just short of 10,000 users (but only because YOU didn't hear about it until now)! 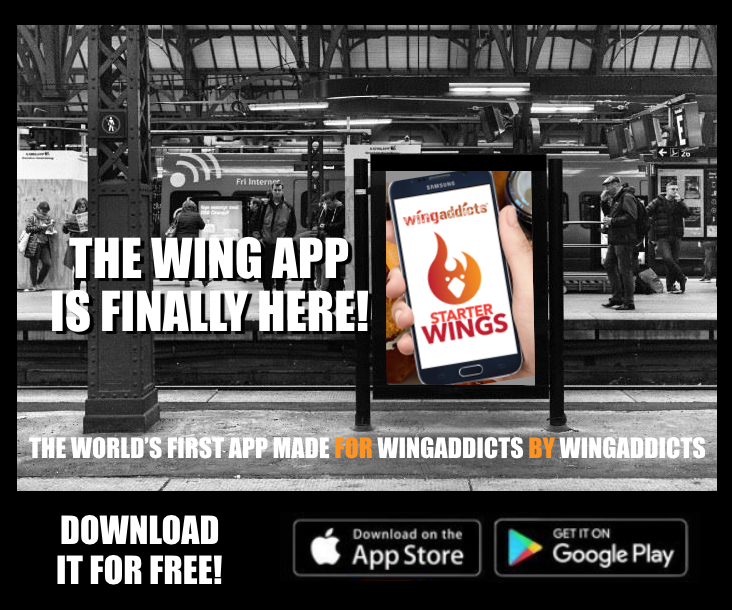 We somehow added 74 brand new Wingaddicts video episodes to our “Wingaddicts YouTube Channel” in 2022 bringing out total to the magic number of 250! Thank you SO MUCH for being a subscriber! Most people don’t know this, but if you go to the YouTube search bar and type in “Wingaddicts” and the name of your favorite restaurant, that episode pops right up. If you’re in CT, we were probably there! 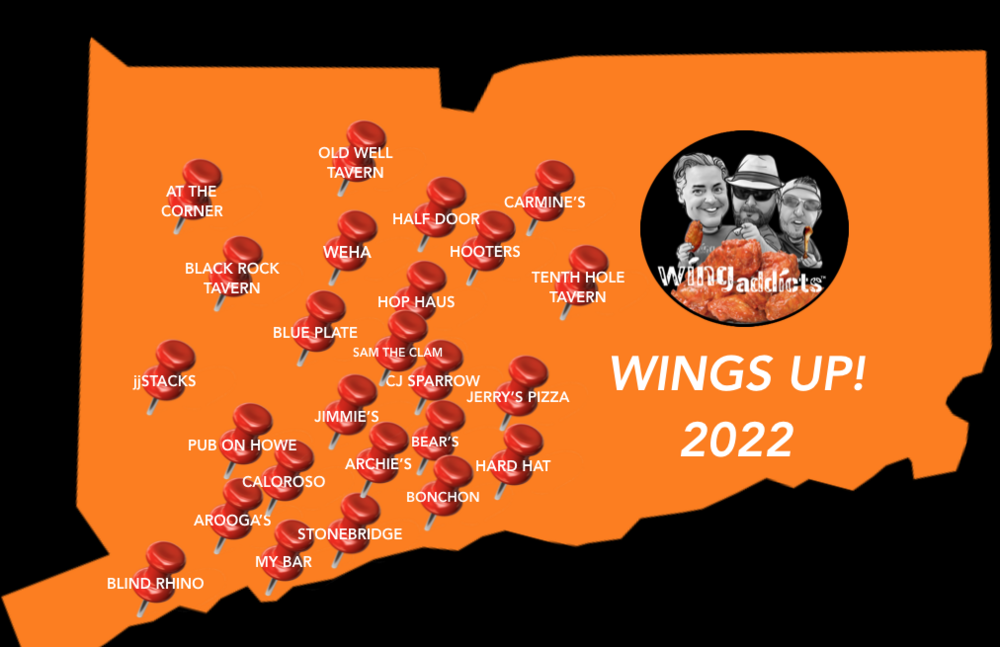 The year saw us visit 26 different CT restaurants for the very first time. We found some that were total surprises, and at least five were instant classics. When we visit a restaurant and all three of us love it (similar to a four-chair turn on The Voice), we ink it for a future episode of Wingaddicts RELAPSE. 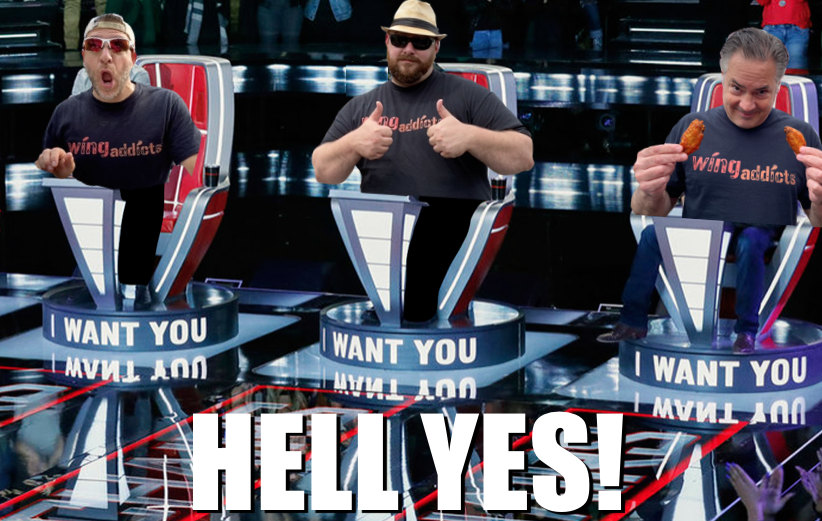 Playing off the second half of our name Wingaddicts, RELAPSE is when we go back in to a consensus favorite and do a deeper dive video, introducing you to the owner, the chefs and interviewing customers. We finish by adding the restaurant to what we call “Mount Crushmore” which is actually our Wingaddicts CT Hall of Fame.  In 2022 we were so busy we only managed three RELAPSE videos which were at Archie Moore's, Blind Rhino and CJ Sparrow taking our total HoF restaurant list to Lucky 13. Don’t worry, there are absolutely more on the calendar for 2023! 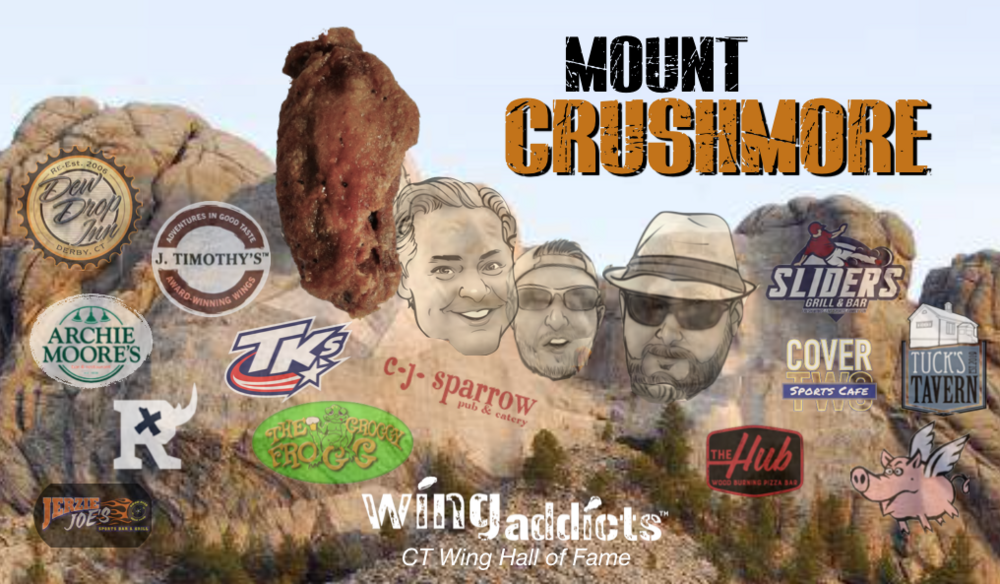 The year also saw us launch our new series called “Saucy Saturdays” where we order naked wings at a random wing restaurant and feature a bottled sauce or rub from around the country, reminding you that when you make wings at home "Always use a condiment." We normally invite the restaurant owner or chef to join us in the episode and help us sample the sauce. We logged twenty Saucy Saturdays this year, and will shoot for twice that in the year ahead as we’ve got some exciting ones on tap! 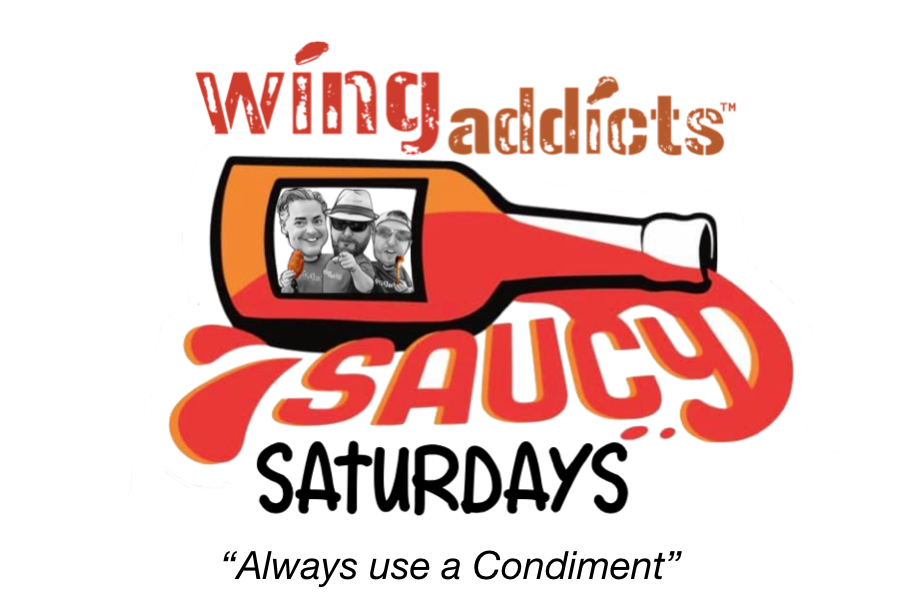 Wingaddicts University is another project we’ve been working on for a while and we finally got around to launching the series this fall. We’ve only produced the first two episodes (Boneless Wings and Drumstick Lollipops) but we’ve got more to come, along with a new series called “Wing Fryin With Chef Ryan” which will introduce short recipe videos.

Now for the elephant in the room (well, actually it's a bison). People would mock us asking, “How can you claim to be Wingaddicts if you’ve never gone to Buffalo for wings?” Great question.  So . . . we went to Buffalo. Not only did we go to Buffalo, but we visited all 14 restaurants on the famous Buffalo Wing Trail and shot video episodes there as well. What a great experience! You can watch them all in "Season Nine; At the Shrine."  One thing we learned is that they don't call them "Buffalo Wings" in Buffalo. They're just wings! Haha 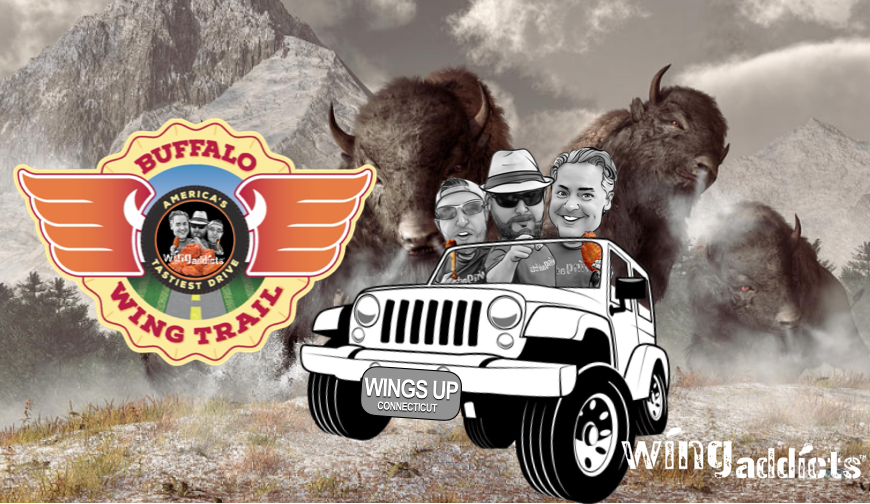 During the same trip, we finally attended the National Buffalo Wing Festival (in its 20th year) and got to meet the restaurant owners competing from around the country. And we met some great ones! In fact, we ate wings from nine different spots at the festival and featured their creations. The only two CT restaurants attending were WingItOn out of Waterbury and Blind Rhino out of South Norwalk. WiO won for “Best Buffalo" and the Rhino won for "Best Spicy Buffalo” for the second-straight year. Hmmm. The BIG winner for 2022, though, was Trent Weitzel and his crew from Weitzel's Wings or Double Dubs out of Wyoming. Five awards including "Festival Favorite." 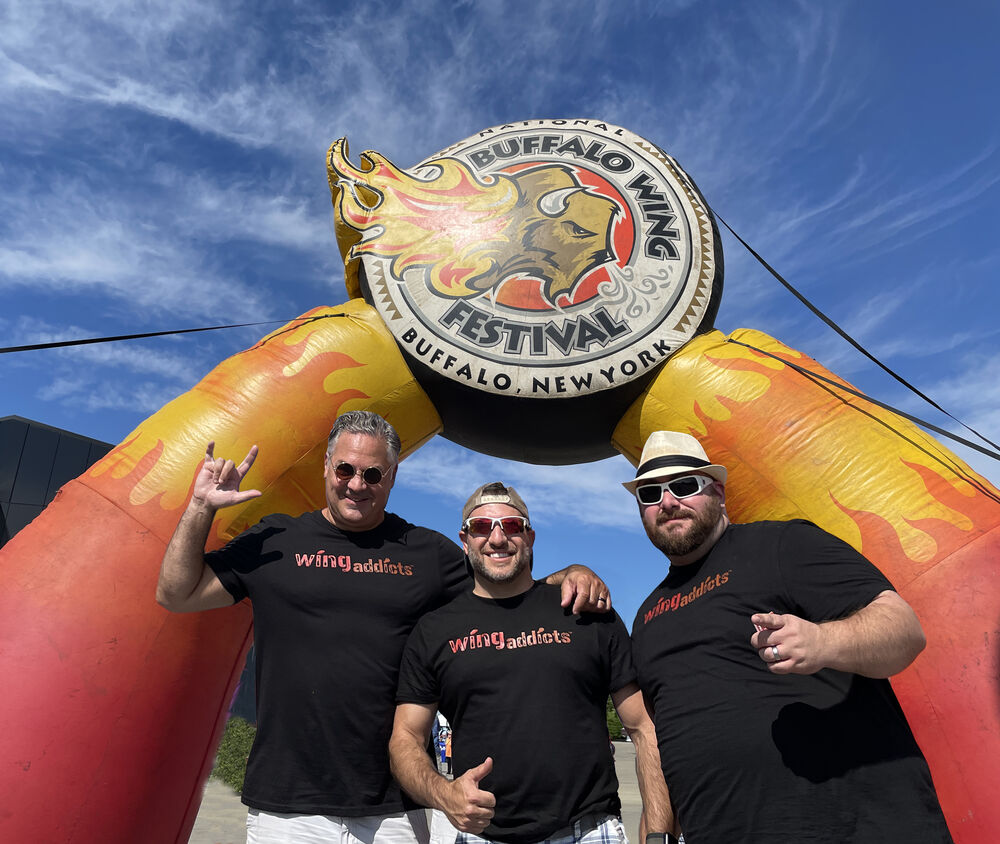 We also witnessed Miki Sudo defending her wing-eating championship against Joey Chestnut and a panel of amazing professional eaters! Not many people on the planet can eat 233 wings in 12 minutes. That's one wing every three seconds. Wings up! 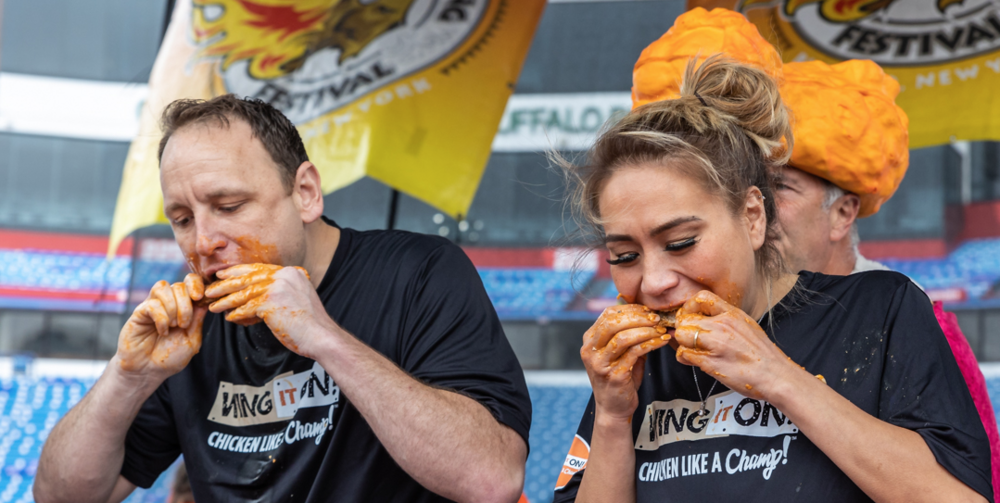 On a side note, we had a blast being featured on Fox 61 news for a Super Bowl segment. We spent nearly 45 minutes in the studio with Chaz and AJ on WPLR one morning, and also got to sit in the studio with Jeremy Wells for his “Day Drinking With Dog” podcast.  Meanwhile, the Southington Chamber of Commerce invited us to be the “Celebrity Judges” for the 2022 Southington Wing Fest in November which was a riot.

Finally, we saw our Facebook “Wingaddicts Community” group grow to over 17,000 members who post wing pics and discuss the world’s best food on a daily basis. We started our @wingaddicts Instagram platform where we continuously post the pictures of all the different wing flavors we are enjoying along the way.

At the writing of this blog post we have currently eaten 547 different wing flavors and celebrated #500 (Chocolate Habanero) at Dew Drop Inn back in October.

The Year 2023 is going to be amazing and we hope you’ll join us every step of the way! What will the new year bring? That’s easy.

*  And keep an eye out for the Wingaddicts Connecticut Wing Trail, coming in 2023!