18 Specialty Wings (Non-Buffalo) You Must Try in CT! 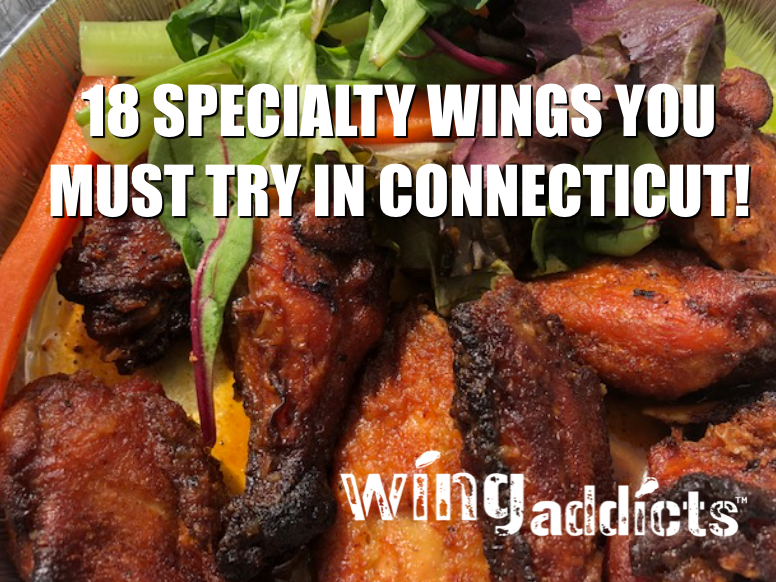 Considering that the Wingaddicts have become the obvious experts on chicken wings in Connecticut, having now eaten at over 60 wing joints in 2020 alone, we are often asked “who has the best wings in CT?”It’s an impossible question to answer, considering that all people have different preferences. Some like their wings bigger, some smaller. Some like them moist and juicy, some well done and crunchy. We have air fried, oil fried, baked, roasted, grilled, and smoked wings. Oh, and literally hundreds of flavors. Buffalo is king no more.

So instead of rating wings (which is pointless and insane) we decided to compile a list of 18 “non buffalo” specialty wings in Connecticut that you need to try! Full disclosure, this list could easily be 30 or 40 but we’ll leave some for another time. Doni “The Cleaner,” Wingchef Ryan, and I each picked six personal favorites we’ve enjoyed over the past six months.

There’s no particular ranking or order, but all three of us are very sure that you’ll rave about every single one of these!

1. Korean BBQ at Taprock Beer Bar and Refuge in Unionville: This wing was next level in every regard. Sticky, flavorful, perfectly cooked and - hands down - the best Korean BBQ wing we’ve experienced on tour thus far! I’d drive an hour-plus just for an order of these wings. 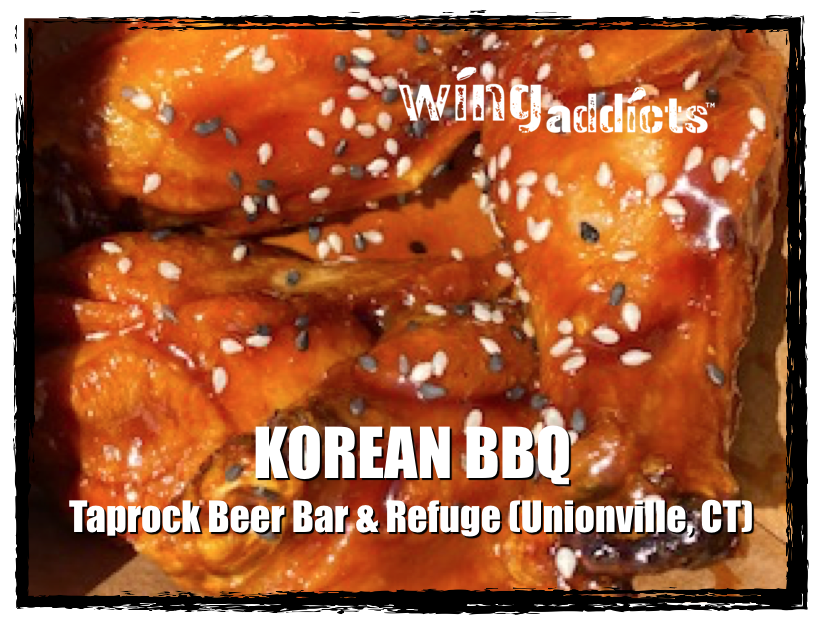 2. General Tso at Sliders Grill & Bar in Southington: There were so many we could have recommended from Sliders (which also has locations in Berlin, Middletown, Plainville, and Wallingford) but these General Tso’s were the best we’d ever tried. And was one of Doni "The Cleaner's" faves. 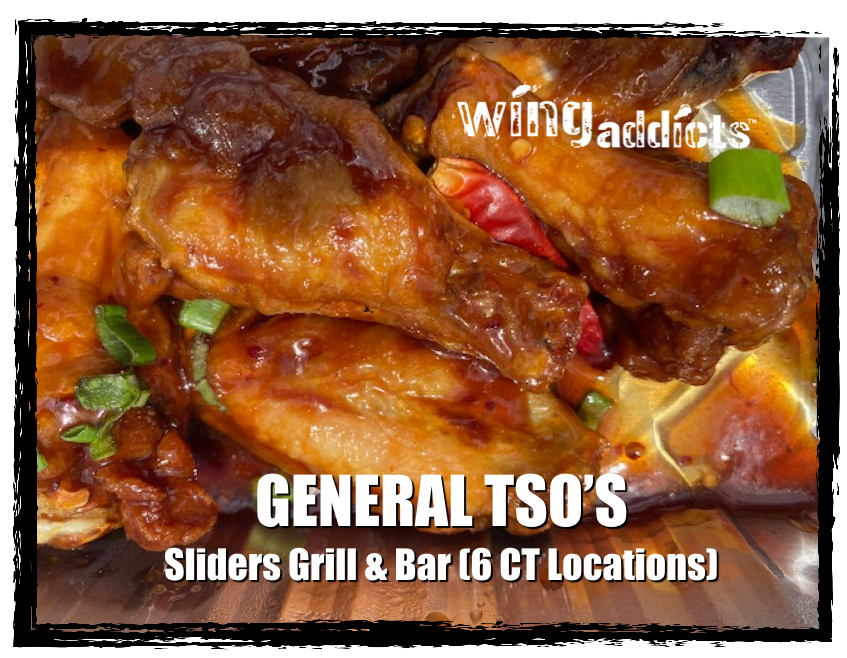 3. Teryaki Wasabi Drizzle at Ordinary Joe’s in Oakville/Watertown: Forget about the amazing presentation and asthetics, this wing was like eating chicken wing sushi! 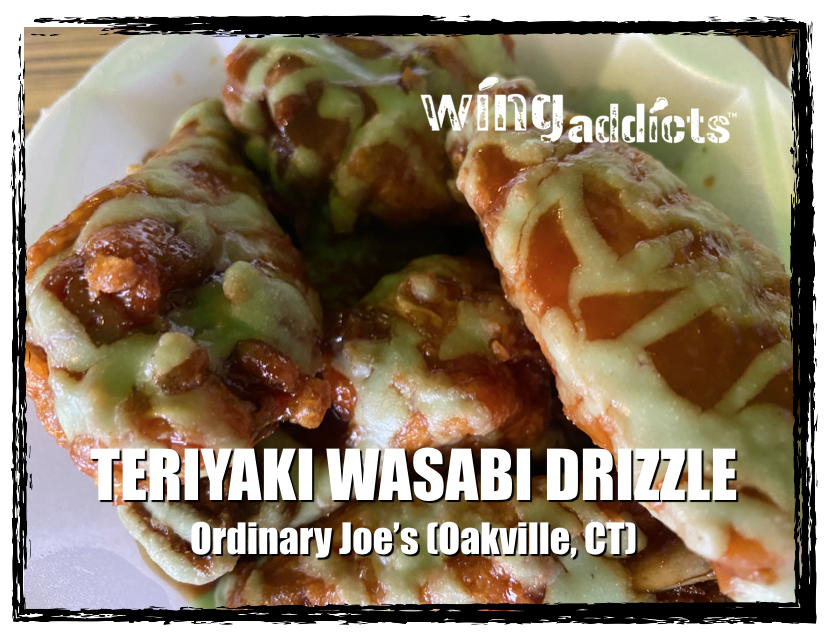 4. Jamaican Jerk at CJ Sparrow’s in Cheshire:  A lot of places offer jerk wings but all things considered, these were absolutely among the best jerk wings the three of us have ever had. It was a dry rub with a wet sauce added. Yeah mon!! 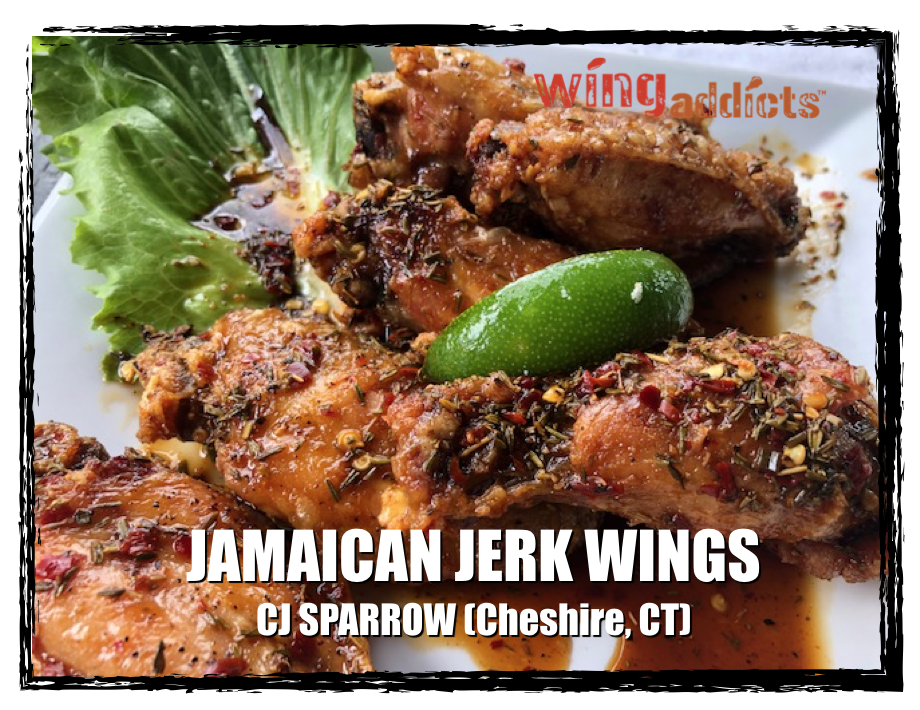 5 . Ranch BLT at Dew Drop Inn: in Derby: To be fair, Dew Drop has 100 flavors and you’ll never have a bad one, but this is such a great pivot from the normal and Doni and I were both blown away by this amazing wing! Who would EVER think of this? Yes, there are wings under there and they taste exactly like a bacon, lettuce, and tomato sandwich. Don't believe us? 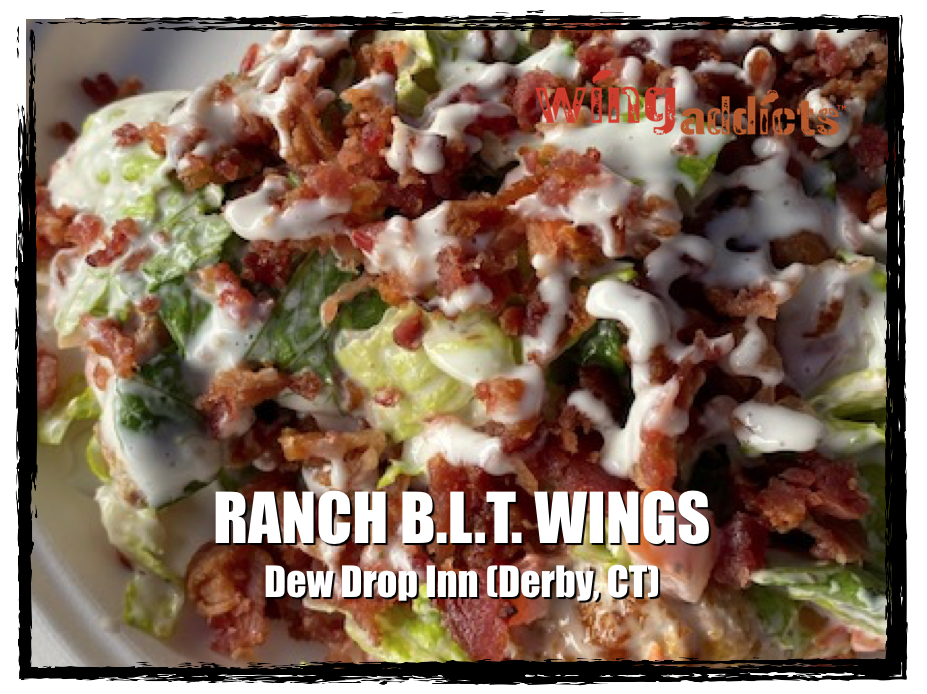 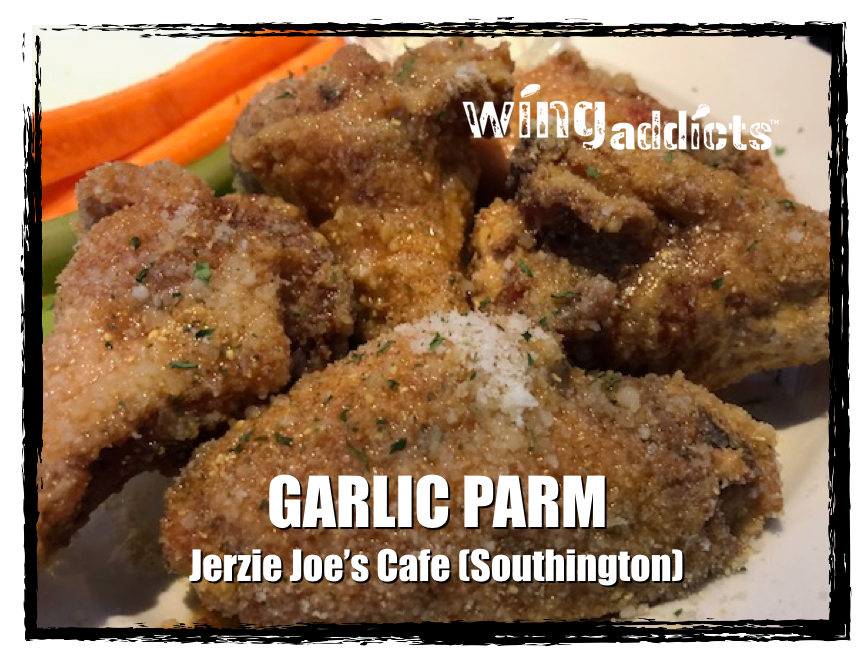 7. The Hollywood at Groggy Frogg in Southington:  This place has a gazillion awards for best wings in Southington (which has to be one of the top 3 best wing towns in the state). There are probably 75 flavors on the menu but this "Hollywood" wing, named after local musician, Jon Hollywood is a crazy combination of teryaki, garlic, parm and chili pepper. It's as unique as they come. 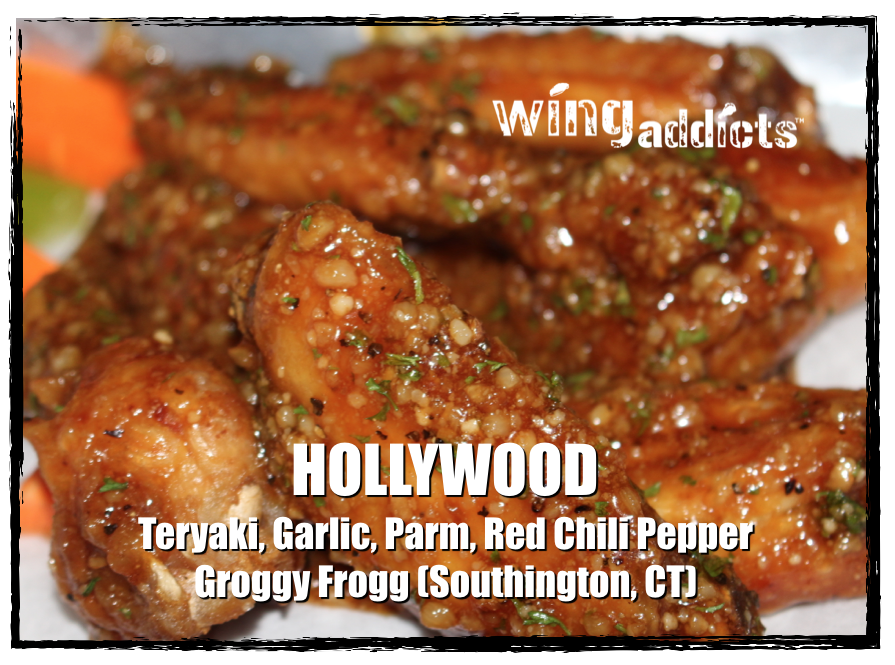 8. Cherry Pepper Twist at MAG’s Pizza in Seymour: Jeeze, just the name should reel you in but once you eat this flavor bomb your life will change forever. Sometimes pizza joints have killer wings. This one does. 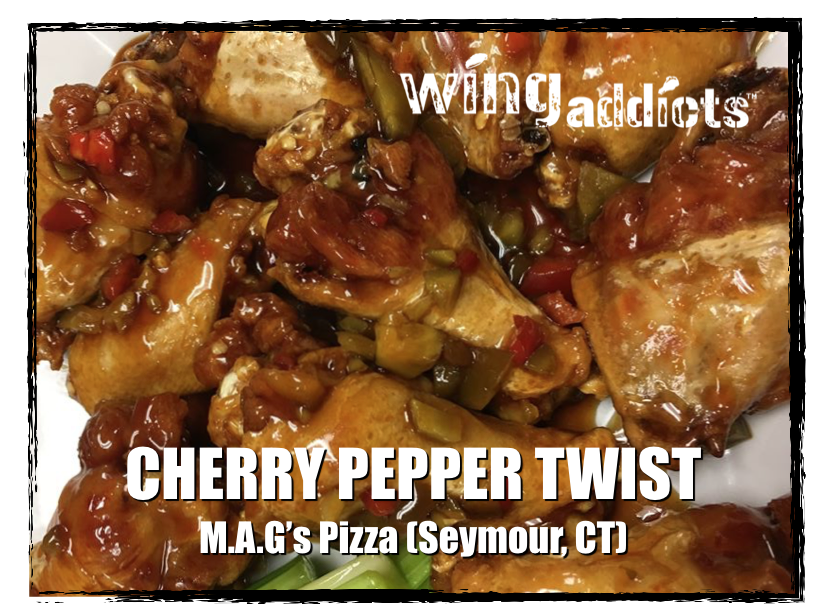 9. Boom Boom at The Hub in Naugatuck (and Ansonia): We weren’t sure what to expect on this one and the flavor is tough to explain. Sweet, hot, and delightful. Oh, and wood fired. Potentially my favorite wing of all time. 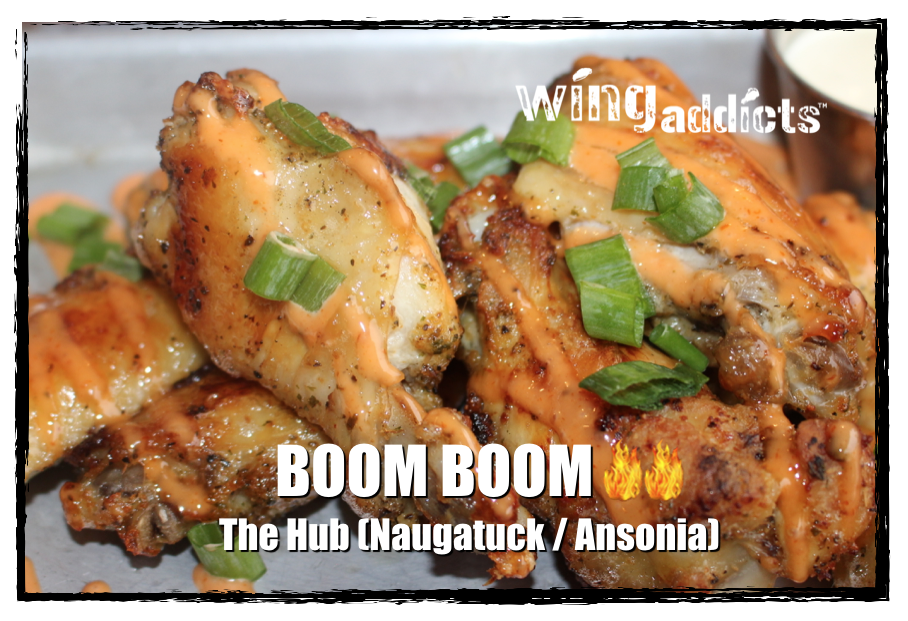 10. Red White and Bleu at Tuck’s Tavern in Naugatuck: It’s even difficult to put this wing into words. Just look at the picture and take our word for it. Oh, and not for nothing, the honey hot wings were the best I've ever had too. 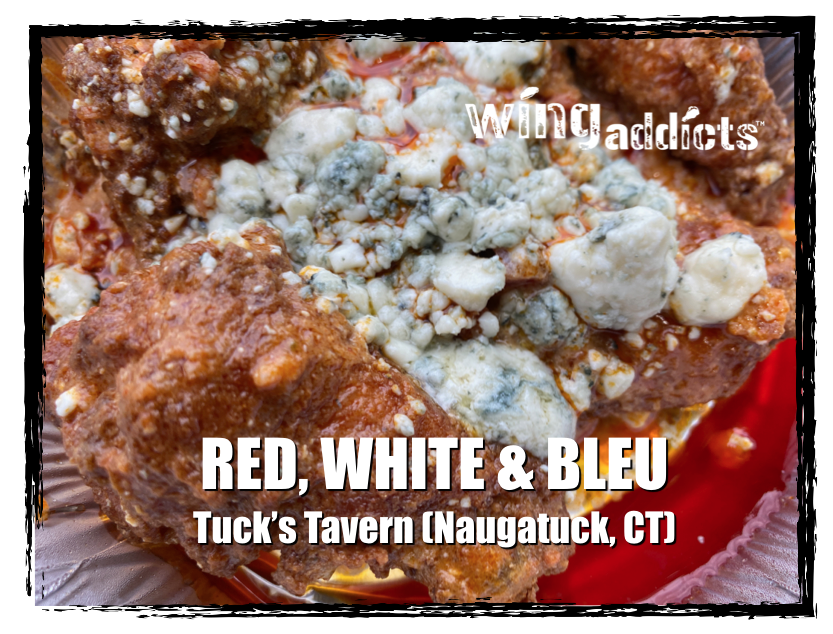 11. Vinnie’s Special at Hometown Pizza in Southbury:  So Vinnie, the owner, whipped up a special combo for us one day and now it’s a permanent fixture on the menu. What's in it? How about BBQ, Buffalo, Lemon, Garlic and Honey?! It’s hot, sweet, tangy, and pure love! 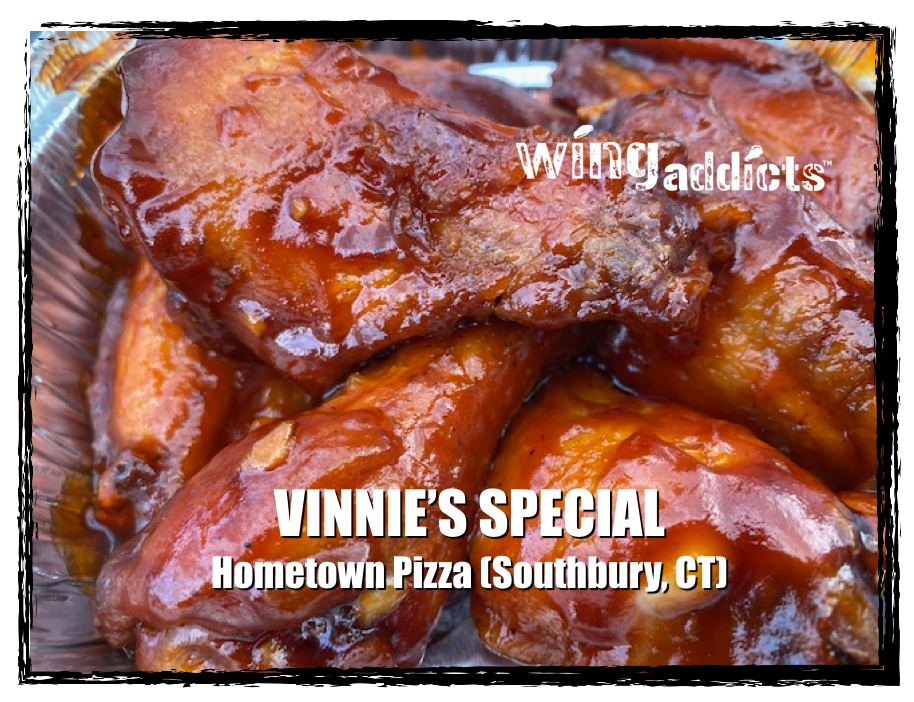 12. Cilantro Honey Sriracha at Uncommon Grill in Watertown: This wing is as delicious as it sounds in the name! Great sized wings, perfectly cooked, and come on . . . cilantro, honey, sriracha?! OMG! And wait til you see the rest of the menu! 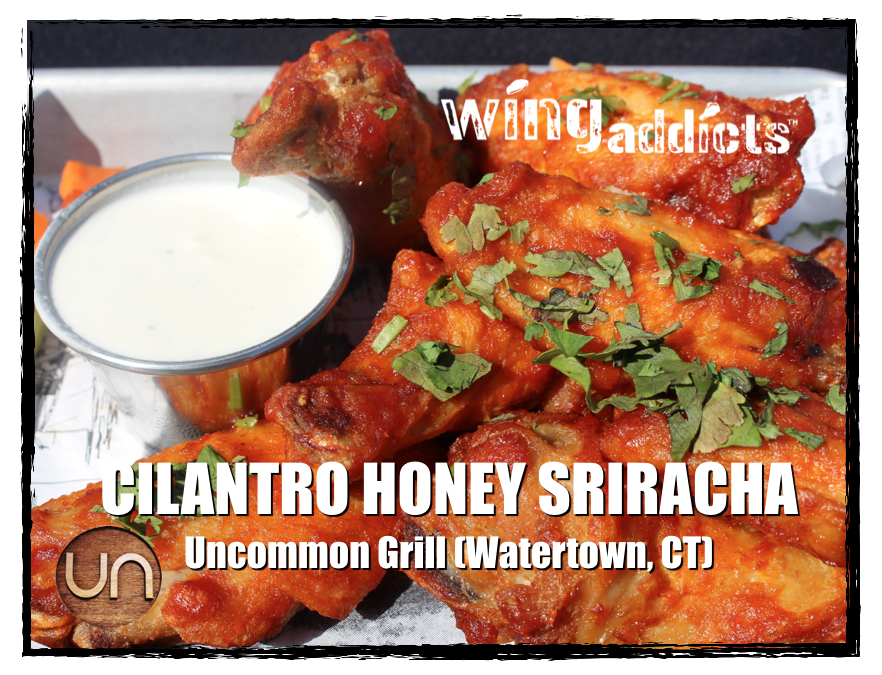 13. Tequila Lime at Senor Pancho’s in Middlebury: No, you wouldn’t think to order wings at a mexican restaurant. Trust us. Make an exception! The photo does not even come close to doing these wings justice! 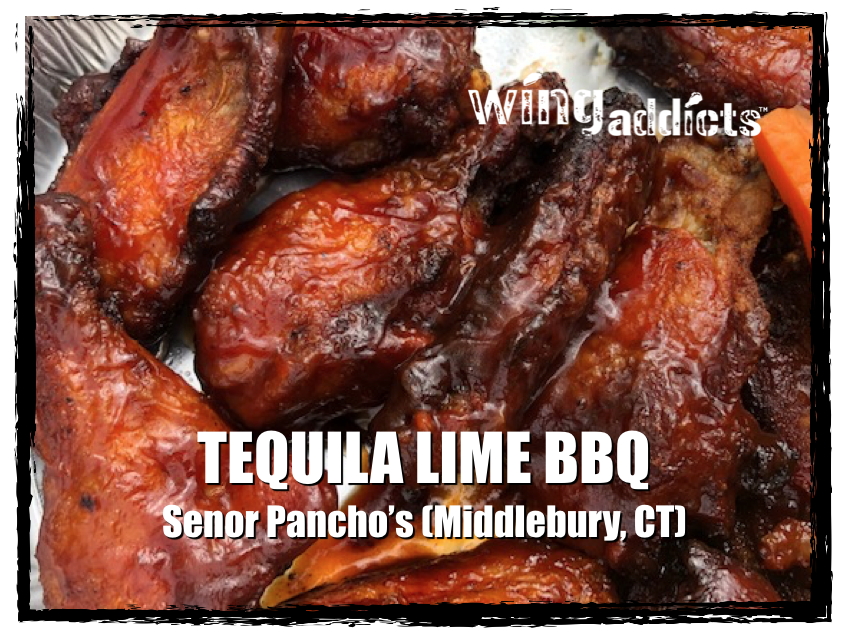 14. Hot Garlic at The Lodge in Southford: They move a lot of wings at The Lodge, but hot garlic is the big winner there time after time. If you like a lot of sauce on your wings (and sometimes we do!) then The Lodge will make you very happy! 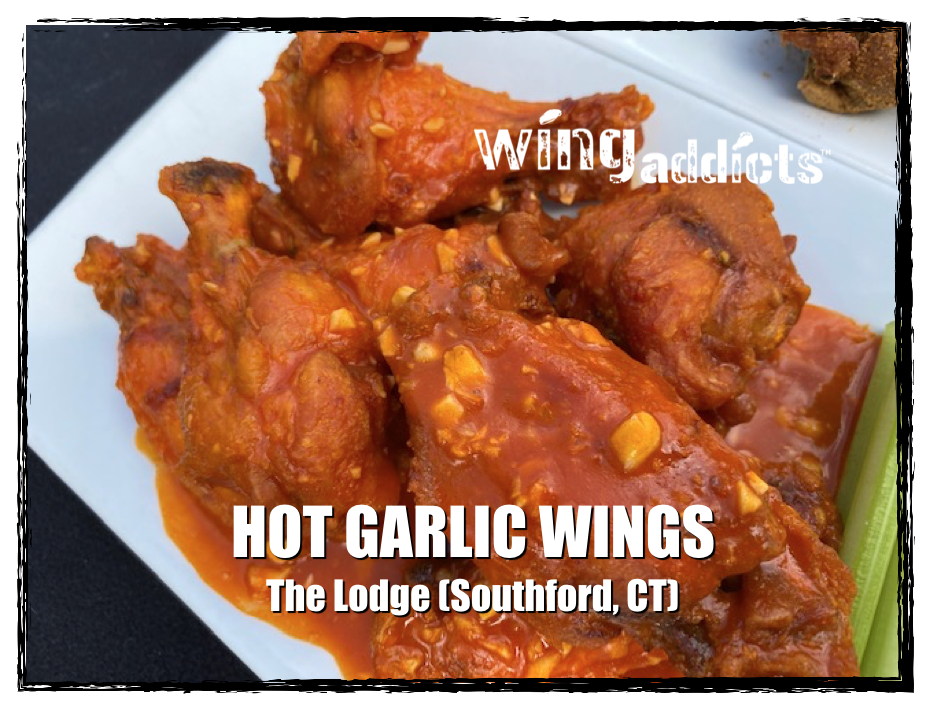 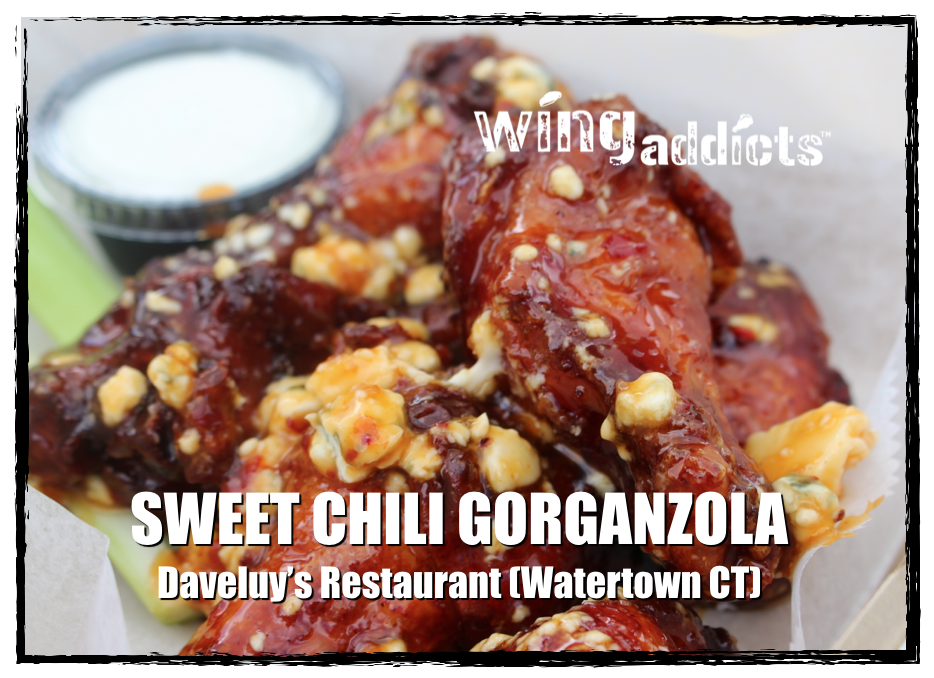 16. Carolina Tang at Sitting Duck Tavern in Oxford (also in Stratford & Trumbull): When Wingchef Ryan can’t stop talking about a flavor, you know it’s off the charts. This one was everything you’d ever want from a Carolina wing and more (and you can get it in chicken or duck)! What?! 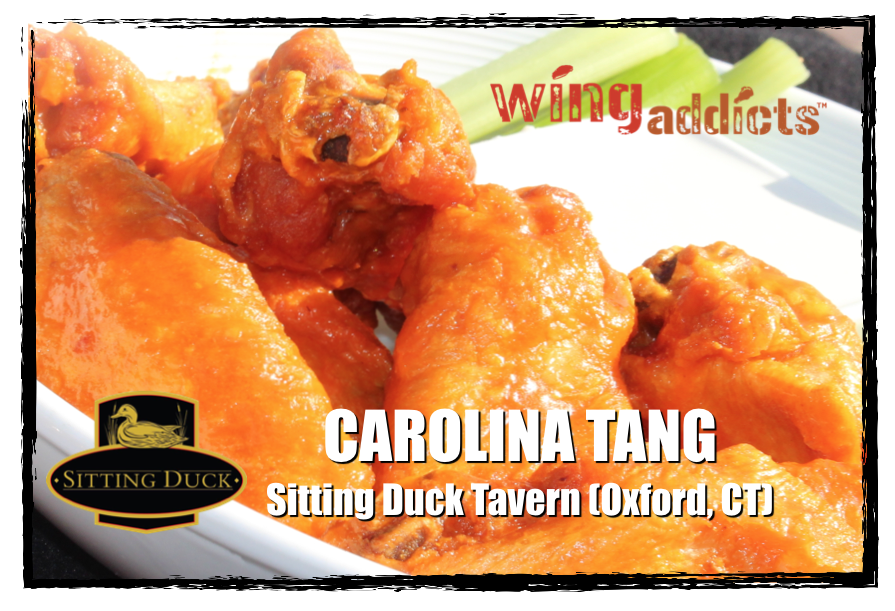 17. Jerkadactyl at TK’s in Danbury: They’ve been banging out mega flavors for decades over at TK’s and this particular flavor has been a favorite of mine for years. My go-to.

18. Lemon Pepper Wings at Cover Two Sports Cafe in Sandy Hook: OK, so we devoured six different flavors at Cover Two and Lemon Pepper was an afterthought. BUT . . . sometimes the best things in life hit you by surprise. HANDS DOWN THE BEST LEMON PEPPER WINGS we've ever had. Take this to the bank! 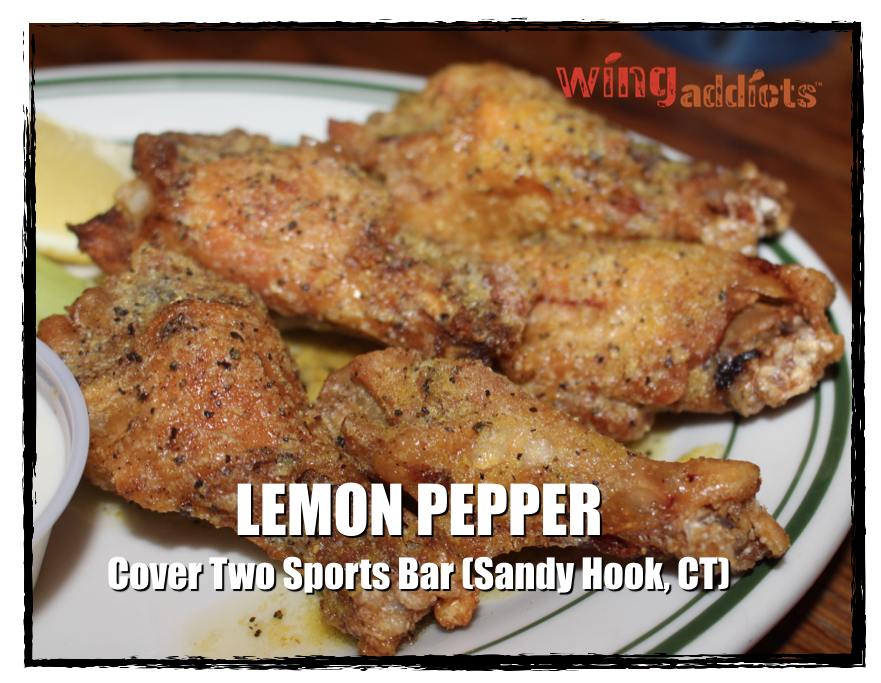 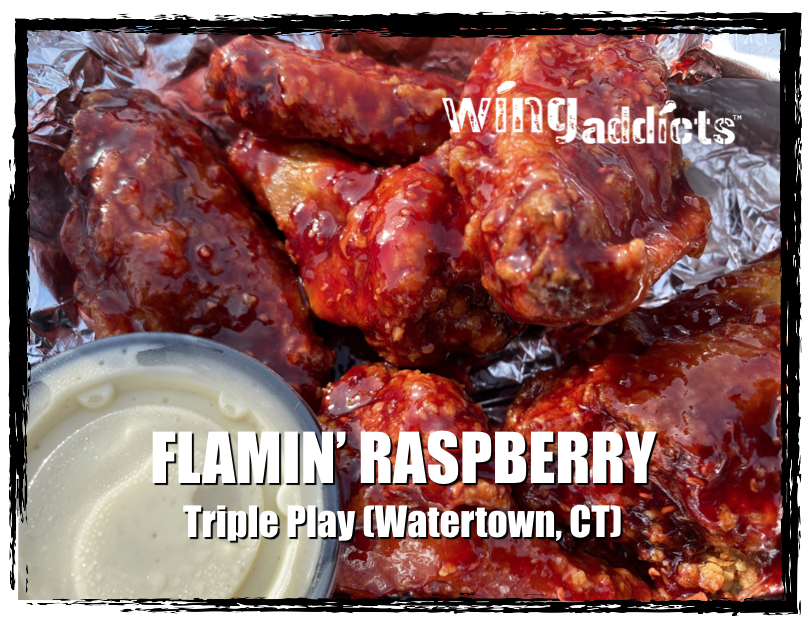 * You can learn more about these amazing places AND each of these wing selections at the Wingaddicts' YouTube Channel. We eat all these wings LIVE in the corresponding video! See for yourself at www.youtube.com/wingaddicts! 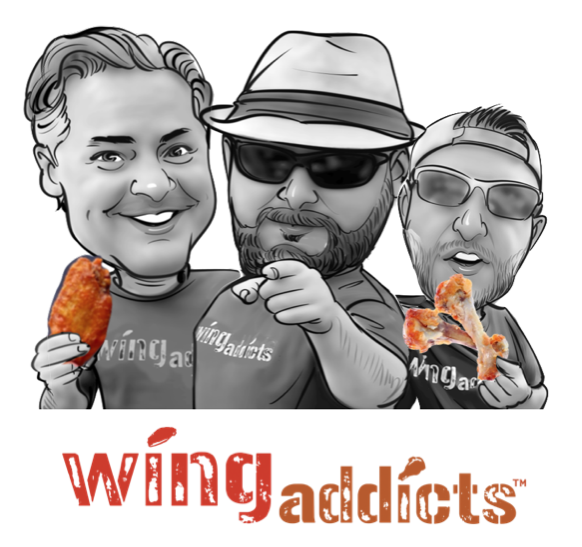 Next Welcome to our WingAddicts Blog.